Will continue to urge India to end siege: US senators

* AJK president and PM urge US leaders to play their role in saving the people of IHK from India's repressive brutal measures
* US leaders share human rights concerns, expressed resolve to remain engaged for resolution of Kashmir dispute 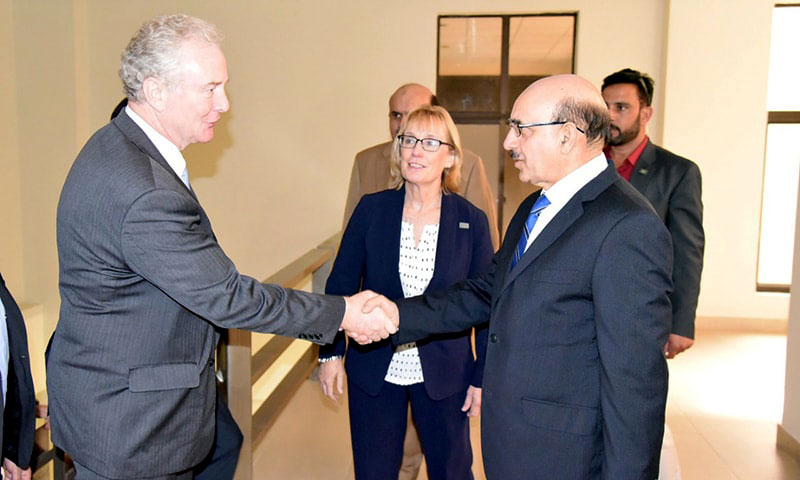 A high-level US Congressional delegation consisting of senators Chris Van Hollen and Maggie Hassan along with their staffers and US Chargé d’Affaires Ambassador Paul Jones visited Muzaffarabad on Sunday to “see the ground situation and gauge public sentiment” following the illegal actions taken by India in Indian-held Kashmir (IHK).

According to a press release issued by the Foreign Office, the US senators said they would “continue to urge India to lift the curfew and release all prisoners as a first step”.

Maj Gen Amer gave the visiting delegation a detailed briefing on the current situation at the Line of Control (LoC).

According to a statement by PM Haider on Twitter, he told the two US senators that “Kashmir isn’t a territorial dispute between India n (and) Pakistan but an issue of the future of the Kashmiri nation and it’ll be settled by the principal party [Kashmiris] on the basis of right to self-determination”.

The AJK leadership expressed its gratitude to the US senators for visiting the region and “appreciated their support for the just cause of the people of Jammu and Kashmir”, said the FO statement.

The US delegation was offered to “see firsthand the vibrant and thriving Kashmiri community in Azad Kashmir” and was provided a historical background of the dispute, along with the “deteriorating situation” in the IHK territory after India’s decision to strip its semi-autonomous status on August 5.

The senators were apprised of the “prolonged curfew and suppression of fundamental rights and freedoms” since the move by the Indian government.

The AJK leaders expressed hope that with the firsthand experience and information gathered, the US leaders would be better equipped to understand the “prevailing humanitarian crisis” in the disputed territory and as a result be able to better explain the ground realities to their colleagues in Capitol Hill and in the administration.

“It was noted that the Indian government’s policy of denial to allow neutral observers to visit the occupied Jammu and Kashmir had exposed specious India’s ‘all is well’ propaganda,” said the Foreign Office in its statement.

President Masood Khan and Prime Minister Farooq Haider urged the US leaders “to play their role in saving the people of occupied Jammu and Kashmir from India’s repressive brutal measures”. The US leaders were also requested to continue “pressing India to resolve the Jammu and Kashmir dispute in accordance with UNSC resolutions”.

“Among other things, they also shared the vision and priorities of AJK government, which were focused on governance, rule of law and development,” said the FO statement.

The US leaders “shared the human rights concerns” and “expressed their resolve to remain engaged for the resolution of the dispute”, the statement concluded.

It may be mentioned here that a few days ago, Senator Chris Van Hollen was denied access to IHK during his visit to India. He told reporters in New Delhi that the Indian government had denied his request to travel to the occupied region.

The Maryland Democrat said Washington was “closely monitoring the humanitarian situation” in Kashmir. The House Foreign Affairs Committee is scheduled to hold a hearing on human rights in South Asia later this month, and Kashmir is expected to be a focus.

Sandeep Pandey, an education reformer, also said he and other activists were barred from leaving the airport in Srinagar, the region’s main city, to where they had travelled on Friday for an informal fact-finding mission.