Modi Embraces the Politics of Division

“The time has come for a decisive fight against … those who support terrorism” – In a thinly veiled speech in Texas on Sunday, India’s PM Modi summed up his political strategy. Amidst rapturous applause from a primarily Hindu crowd of 50,000, he accused Pakistan of “hatred against India”. Modi’s speech came just days before PM Imran Khan of Pakistan is due to take the stage in New York at the UNGA, where he is expected to “highlight the ongoing atrocities in Kashmir”, and accuse Modi of complicity in terrorism.

With both leaders firing shots of similar brand at each other, who can we – the global community – believe? And, is there a difference?

Both leaders appeal to democratic legitimacy rising from ‘the people’. Both leaders emphasize the notion that rightful political authority should rest with majority rule and popular sovereignty. In other words, both leaders are populist leaders. But there is one major difference.

Khan’s populism relies on anti-elite discourse in the name of ‘the sovereign people’. Modi’s populism, on the other hand, relies on the rejection of pluralism, and a faith-based majoritarian rule, which antagonizes India’s 180 million Muslims.

The latter is a far more dangerous strain – not just for Muslims within India, but also for relations between the two nuclear-armed neighbors.

Khan is perhaps a ‘classic populist’ if there ever was one – an outsider who contests the corrupt, morally inferior political class. His rhetoric is dotted with broad appeals to Pakistan’s patriotism and pursuit of self-reliance. Casting himself as the only plausible alternative to an incompetent, unprincipled, and out-of-touch political class, he made farfetched promises: “I will end corruption in 90 days”, “I will not extend a beggars hand to the West”. Indeed, he deserves criticism for the results he has thus far delivered.

But Modi’s populism is more alarming. His rhetoric – both in what he says and what he does not say – is laced with anti-minority hate. Muslims are routinely caricaturized as terrorists, sexual predators, and the cow-hating, anti-India, anti-Hindu ‘other’. Similarly, Modi has not condemned most faith-motivated attacks on Muslims – despite his otherwise animated presence on social media – with others in his party even fanning the flames.

But, has Modi’s populist Hindutva rhetoric, designed carefully to seduce the votes of India’s almost one billion Hindus, truly come at the expense of the Muslims of the subcontinent?

Let’s start with Indian-Muslims. A striking finding by Hate Crime Watch (FactChecker), a database that tracks violence in India, found that over 90% of religious hate crimes between 2009 and 2019 were perpetrated after Modi’s rise to power in 2014. The chart below elucidates these numbers. Between 2010 and 2013, only 18 cases of hate crimes appeared in English-language media in India. The next four years, Modi’s first four years in power, this number jumped to 163 – a 9x increase. 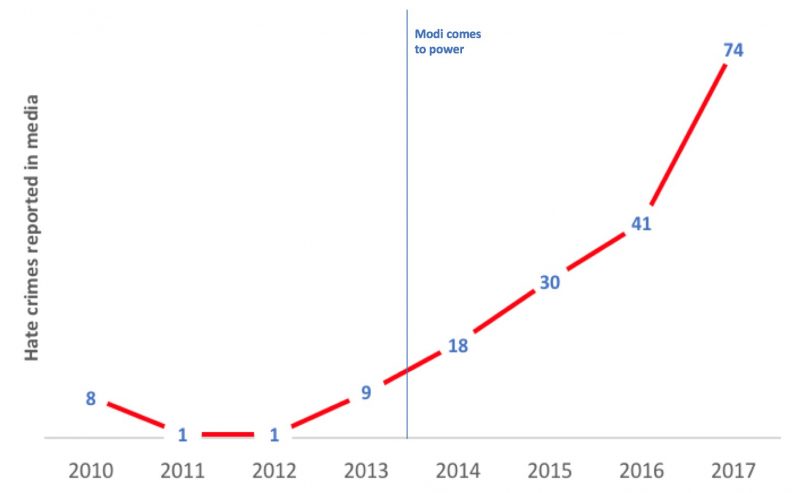 Across all these cases, Muslims have overwhelmingly been the victims, and Hindus the perpetrators. Muslims, despite only making up 14% of India’s population, have been the victims in over two-thirds of the cases.

A widespread campaign of social and moral legitimization of anti-Muslim bigotry seems underway, with over two-thirds of hate crimes recorded in areas governed by the Modi-led BJP. It is not surprising then that only 9% of Muslims voted for the BJP or its allies in 2019, compared to 52% of Hindus – up from 43% in 2014.

And, the issue doesn’t stall there. On India’s Western border, another 220 million Muslims are also at risk.

With little to show in the way of economic development as the 2019 election approached, Modi doubled down on Hindu-nationalism, intensifying tensions in Kashmir. A year of escalating violence in Kashmir, which Modi’s government struggled to quell, culminated in an attack that killed 40 Indian soldiers in Pulwama in February. The bomber claimed to be a local man. But Modi responded by threatening “a befitting response” and launched air strikes against Pakistan in Balakot. In a subsequent dog-fight, Pakistan shot down two Indian jets, bringing the two neighbors to the brink of nuclear war. Pakistan promptly returned a captured pilot to ease tensions

It is no secret that Modi’s electoral fortunes took a significant up-turn after these events. Senior Indian politician and Congress MP, Shashi Tharoor, in his reflection of Congress’ 2019 election loss, said, “We felt, why would a young man in Uttar Pradesh, who voted for Modi five years ago in expectation of getting a job, vote for him again when he still doesn’t have a job? But we were wrong. Because Pulwama and Balakot were very good examples of how the national security issue was used to support the BJP’s effort”. 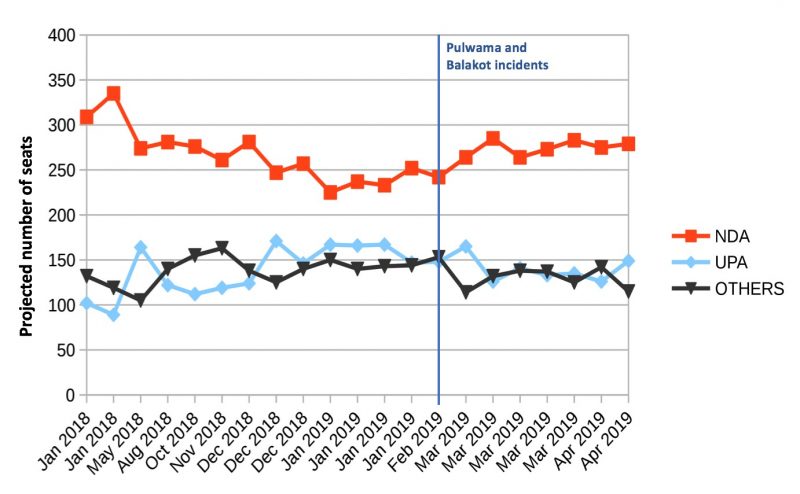 Modi is politically incentivized to keep tensions with its nuclear-armed neighbor at fever pitch, using it as a tool to manipulate the electorate.

With the 8 million Muslims of Kashmir still under military lockdown, who was Modi referring to in Texas when he threatened “those who support terrorism”? And what is the burden of proof?

Simply put, Modi is at the helm of the largest in-country alienation of a minority the world has ever seen. The suppression of the subcontinent’s 400 million Muslims is dangerous. The world should take note.