Of Lyari, sports and drugs

In response to one of the questions asked by a listener of the panel discussion on ‘Lyari, sports and drugs’, one of the three panellists made the Lyari Literature Festival a dichotomous example as a denial of drugs. The question was raised to rid the listener of his confusion about why the panellists were merely painting the positive image of Lyari! The listener who introduced himself as an ‘unpublished author’ objected that he had landed in Lyari to author a book on ‘gang-warlords’ of Lyari, but the panellists instead had been showing the ‘soft’ image of Lyari. The unpublished author, as he mentioned, was inspired by Mario Puzo, the author of Godfather’, linking the work of the author to Italian mafia. 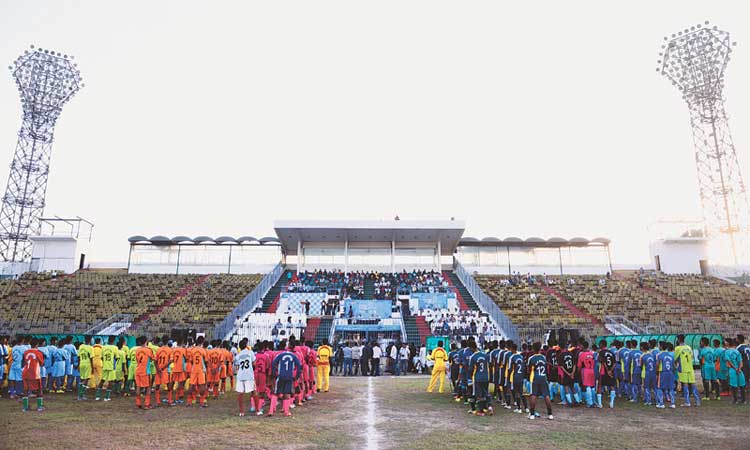 The entire discussion was summed up with no clue in hand for solution of the issues discussed during the event. For instance, the discussion detracted from the nitty-gritty of finding ways to lift the youth out of the current menace of drugs with promotion of sports in Lyari. The stereotypical image of Lyari, particularly after surge in gang wars’ infighting for supremacy was left untouched. Ironically, the entire discussion boiled down to racial lines when one of the panellists indicated to the encroachment of a football ground by the hockey federation, while proving that hockey was a game of white-skinned people, and football was played by dark-complexioned and curly-haired Lyariitis.

Interestingly, Zulekha, one of the female panellists and a cyclist, had fallen into the whirl of a spiral of silence, as the entire event remained male-dominated.

The densely populated Lyari has been one of the most precarious areas when it comes to maintaining law and order. Inflicted by a myriad of problems, Lyari has not only been racially stereotyped for decades, it has also been stereotyped in terms of sports. Lyari is believed to have much importance for sports. Importantly, it is known to have become the hub of top-notch football players. The link between sports, drugs and politics in Lyari has been a corroborated nexus. The notion of thwarting the prevalent menace of drugs in Lyari with only promoting of sports is wishful thinking. As noted by the panellists, drug peddlers were even lurking in football clubs and educational institutions.

Apart from drugs and gangs war in Lyari, the broad fame that Lyari has earned so far is in sports. Football, particularly, runs in the veins of the Lyariitis. However, football has become a cliché that has brought the Lyariitis to have an obsession with it. For instance, the entire discussion in the event, more or less, sounded like expressing complaints that football has never gotten promotion on government level. On the other hand, there remains a question mark over Lyariitis. Why has Lyari not given birth to cricket players of national repute? Does Lyari lack potential to promote cricket or does the basis of racial differences debar a certain lobby from promoting cricket making it a genre of sports reserved for the white-skinned?

In Lyari, the football mantra has gone far beyond sports now. Its clichéd nature has boxed the youngsters to revive the glory of Lyari through only football. Truly, sports can be erected as an iron wall against the menace of drugs and other things thought to be harmful for the youth. Nevertheless, the economy takes a higher position than sports in the socioeconomic ladder.

Inflicted by a myriad of problems, Lyrai has not only been racially stereotyped for decades, it has also been stereotyped in terms of sports

Interestingly, it’s the socioeconomic condition of the specific area that determines the inclusiveness of the institutions thriving within that society. For instance, cricket is alive and kicking in Pakistan due to the fact that it has become a source of generating revenue. Hockey became irrelevant; investment in the game became of no interest as its wheels stopped generating the revenue. The glorious fall of hockey is not a story of bygone days.

The foremost problem with Lyari since the 1970s has been an ambidextrous engineering of ideology. The spell of the ‘ideological engineering’ started with Pakistan People Party’s (PPP) quest for searching a stronghold in Karachi to resist the burgeoning ‘Muhajir uprising’, which was laid purely along ethnic lines. Poor literacy and rampantly increasing population of the area laid a turf over which the PPP could easily bowl and win its political matches.

About the demographic growth of Lyari, Laurent Gayer, the author of Karachi: Ordered Disorder and Struggle for the City, writes that Lyari in1886 had become one of the largest of the twenty-four districts of Karachi. And, after the partition, from 1941 to 1956,the population of Lyari grew rapidly from 81,768 to 360,000.

The PPP could have made a strong bastion in Lyari had its ideological engineering taken a path to promote inclusive institutions, based on giving incentives to the youth in the field of education and sports. However, given the illiteracy and poverty of Lyari, the PPP turned to elements that were to be acknowledged on the basis of their feared image. The empowered people later were to be known as those involved in drug peddling and were the bedrock for gang wars.

According to Gayer, the late Rehman Baloch, later known as Khan Bhai, accumulated fame through widespread fear. Gayer describes Rehman as a seasoned football player who during PPP’s government also tried to switch his career. His debut to be acknowledged as a philanthropist was successful. ‘Rehman Dacoit’ started to paint a picture of him as ‘Khan Bhai’ through initiating philanthropic works. Gayer writes that Rehman also looked after some football clubs where players got remuneration.

At the socioeconomic ladder, economy lies at the centre. As noted by the panellist Zulekha, she, before becoming an international cyclist, needed expensive bicycles, which were donated by some NGOs. The ideological engineering in Lyari for achieving political gains made drugs the foremost and easiest business.

Sports might help us as a contemporary tool to keep the youth away from drugs, but cannot be deemed a long-term approach to cleanse Lyrai from drugs and chaos. The Lyari Literature Festival, indeed, has cracked the stereotypical image of Lyari and Lyariitis. But could Lyari not create excellent cricket players who would generate wealth after reaching national level, and in return, invest in Lyari’s football, boxing and cycling? If drugs are a tool to make Lyariitis mentally handicapped to think through an engineered ideology, why can’t cricket be used as a tool to revitalise the frozen economic wheel in Lyari to promote education vis-à-vis sports to rout drugs and stereotypes?

The writer is a journalist and a researcher.