The Sindh government has announced prize money of Rs1 lakh for identification of garbage throwers in Karachi.

Sindh Information Minister Saeed Ghani made the announcement on media while claiming that problems are being deliberately created in the metropolis.

The PPP leader maintained that cleanliness drive has been initiated and positive results are coming out. He urged the citizens to record videos of those who throw garbage outside and inform the relevant authorities.

Moreover, he slammed MQM for staging protest against the Karachi Water and Sewerage Board to stop it from working. Everyone knows who block the sewerage system by putting sacks in it, he commented.

Ghani announced two mobile numbers where citizens will be able to send videos of people throwing trash around the city through WhatsApp. Citizens can send videos on 0300-0074296 and 0300-0084296.

The provincial minister told reporters that he had personally witnessed people purposely dumping heaps of garbage on roads and said that those who “claimed that they have inherited the city” were polluting Karachi. 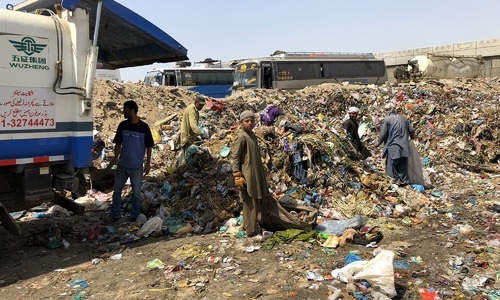 “This is a conspiracy to damage the cleanliness drive,” he said. The minister promised that identity of citizens who reported such incidents will be kept secret.

He said that the Sindh government is bearing extra costs because of some elements that choked sewerage lines and break water pipes on purpose.

On Sunday, Sindh Chief Minister Murad Ali Shah had made similar remarks and said that “so-called friends of Karachi” had choked 24 sewers in the city’s Malir 15 area by placing boulders and stones which would have led to leakage to sewerage water on the metropolis’ main roads.

Notably, the Sindh government last week initiated a cleanliness campaign dubbed Clean My Karachi after facing criticism over failure to clean the metropolis.