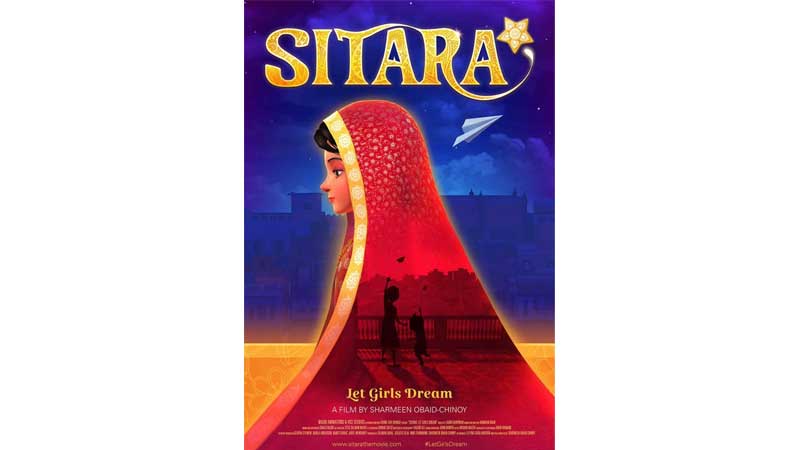 The fifteen-minute animated short film chronicles the life of a young girl whose dream of being a pilot is crushed when she is forced into child marriage.

Written and directed by Sharmeen Obaid-Chinoy, ‘Sitara – Let Girls Dream’ takes the audience on a journey through the old city of Lahore where a 14-year old girl, Pari, dreams of becoming a pilot. Her story is told through the perspective of her six-year-old sister Mehr, who is unaware of the traditions and barriers that lay in the path of women from her family. It is a story about the burdens of a family and the impact of a culture where girls are still struggling to fully realize their dreams. SITARA is a silent film [no dialogues] which embodies this struggle.

“Young girls everywhere still face considerable hurdles in achieving their dreams. ‘Sitara’ embodies that struggle, it is a story of Pari, a young girl who dreams of becoming a pilot and is robbed of it. For me, SITARA is more than a film, it is a movement that we want to start across the world, that encourages parents to invest in their girls’ dreams, encouraging them to free their girls from the burdens of early marriage”. said Sharmeen Obaid-Chinoy.

The music for SITARA has been composed by Emmy Award-Winning composer Laura Karpman. Recorded and mixed at the world’s most famous and iconic studio, Abbey Road studios, Karpman’s score has been paramount in bringing the film’s story and characters to life.

SITARA: LET GIRLS DREAM, is produced under the banner of Sharmeen Obaid-Chinoy’s animation company, Waadi Animations entirely in Pakistan, from its concept to execution in association with Vice Studios and Gucci’s CHIME FOR CHANGE.

Every year, 12 million girls around the world are married off as child brides denying them the right to education and an opportunity to fulfil their dreams. With ‘Sitara – Let Girls Dream’, Sharmeen Obaid-Chinoy hopes to start a global conversation, encouraging parents and families to invest in their girls’ dreams.