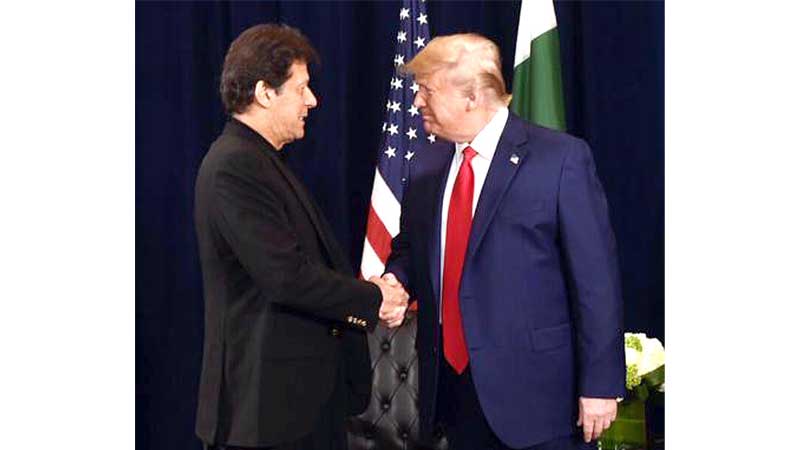 Pakistani Prime Minister Imran Khan on Monday pushed US President Donald Trump to restart talks with Afghanistan’s Taliban and said Washington has a “duty” to calm the Kashmir standoff with India.

“Stability in Afghanistan means stability in Pakistan,” Khan said at the start of a meeting with Trump on the sidelines of the UN General Assembly (UNGA) in New York.

“The most powerful country in the world has a responsibility,” Khan said, calling India’s clampdown “a siege” and warning that the “crisis is going to get much bigger.”

Trump, responded byrepeating his offer to mediate between India and Pakistan on Monday while speaking to press with Pakistani Prime Minister Imran Khan, ahead of their meeting at the Intercontinental Barclay Hotel on the sidelines of the UNGA.

Trump’s offer comes just under 24 hours after he shared a stage with India’s Prime Minister,NarendraModi, at a large public rally in Texas, where Trump reaffirmed the U.S commitment to a “free the world of radical Islamic terrorism”.

“I trust this gentleman right here and I do trust Pakistan” Trump said on Monday, when asked if he trusted Pakistan after all its trouble with terrorism. He added, “I have a lot of Pakistani friends in New York. Great negotiators by the way.” He praised Pakistan’s work on terrorism.  “I’ve heard they made great progress” he said.

Speaking on Kashmir, Trump said if both Mr Khan and PM Modi wanted him to mediate an agreement between them on Kashmir, he was “ready, willing and able”.

He added, “I trust Pakistan… It’s a complex issue. It’s being going on for a long time. But if they are both willing then I’m ready to do it.he said, adding, “I think I’d be an extremely good arbitrator”.

When asked about Kashmir Khan said he wanted to “bring up” the issue with Trump in private. “It needs to be said there are eight million people under siege by 900,000 troops. That’s a humanitarian issue. “If you were to meet him[Modi] now I would have asked him to at least lift the siege.” Khan said, “I honestly feel that this crisis would get worse.

Trump added they would also be discussing the Taliban and U.S.-Pakistan trade.”We’re going to increase trade with Pakistan by a very large margin” – double, triple quadruple” Trump said.

Speaking on Afghanistan, Trump said it was “ridiculous” that the U.S. has been fighting for 19 years. Moreover, he did not make any promises to restart the peace talks with the Taliban, only said, “ we’ll see.”  He boasted the U.S. had “hit the Taliban hard.” He denied Taliban talks had resumed.

Trump deflected a question on whether he agreed with India’s perspective that Pakistan is a base for terrorists, Trump said, “I have been pointing much more to Iran”

Trump said he “ heard a very aggressive statement yesterday from India, from the Prime Minister… I didn’t know I was going to hear that statement…”  although astonished, Trump added the message, “was very well received” by the cheering crowds of “59,000 people”

On Sunday India’s Modi launched a strong attack on Pakistan during a packed rally in Texas, where around 50,000 Indian Americans gathered. Modi said “they” have “made hatred towards India the centre of their agenda. They support terror, they harbour terrorists”.Modi did not directly name Pakistan.

Trump, who was given a rapturous welcome at the event, vowed to protect “innocent civilians from the threat of radical Islamic terrorism.” Trump said,”India and the US also understand that to keep our community safe, we must protect our borders. Border security is vital to the United States. Border Security is vital to India. And we understand that,” Hesaid to loud cheers from the audience

11 members of the Pakistani delegation were also present in the Monday briefing, including the Foreign Minister, Shah Mahmood Qureshi and Pakistan Ambassador to the  U.S., Dr Asad Majeed Khan.