The manner in which the rupee was allowed to go in a free fall has lost over a third of its value compared to the US dollar in the last year. 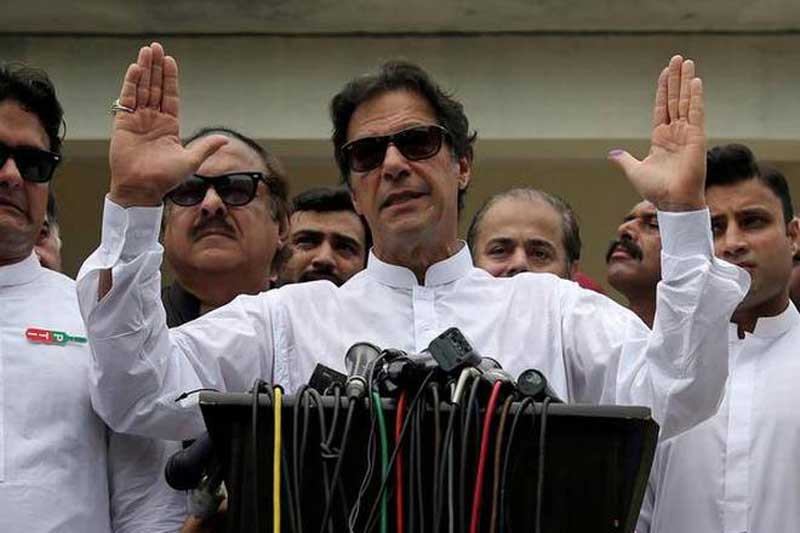 Last year, the charismatic former cricket star was elected prime minister of Pakistan. Most people believed his victory seemed like a win for the military, which was struggling for power with Pakistan’s civilian politicians. Khan’s political rivals and even international observers blamed military of meddling in the election to benefit Khan and his party, Pakistan Tehreek-e-Insaf (PTI). Censorship, harassment and crackdown on media, as well as on opponents, was the tool, which the establishment used to favour the PTI during the 2018 elections.

During the campaign, he portrayed himself as a skilful politician, who could use ambitious promises of reform and development, to knit together a broad coalition in a country, where politics often fractures on ethnic and provincial lines. Khan campaigned on a classic populist anti-corruption platform. He presented himself and the PTI as outsiders, who could provide a fresh alternative to the country’s two established political parties, the Pakistan Muslim League-Nawaz (PML-N) and the Pakistan Peoples Party (PPP), both of them led by family dynasties and beset with corruption and reputations for misgovernment.

When the PTI swept to power after general elections in 2018, the chief among their promises were: accountability; turning around an economy in dire straits; revitalizing growth and overcoming a chronic energy shortage, which had crippled many industries; making the country less economically reliant on the US as well as the much-touted promise that Pakistan won’t go to the International Monetary Fund (IMF).

Moreover, Pakistan would not allow drone strikes by the US in Pakistan’s tribal areas. South Punjab would become a separate province. He talked about the transformation of Karachi; de-politicisation and strengthening of police and civil services reforms; ensuring freedom of the press; implementation of constitutional rights for minorities; elimination of gender parity; 10 million jobs and five million houses. Likewise, he wished to unleash Pakistan’s potential in agriculture and revamp the livestock sector, local government structure and transform education. The government presented one-year performance report a few days back; claiming that the country had been put on the right track and people would start getting benefit from the second year of its term.

The major achievement is said to be the IMF program while Imran Khan promised that Pakistan won’t go to the International Monetary Fund (IMF); seeking a bailout (and a focus on West Asia and China) but he has done exactly the opposite.

Let’s start with the economy and change. The PTI government took control in 2018 and PM Khan promised change and change he has delivered. He has changed his finance minister, the governor of the State Bank and the head of the Federal Bureau of Revenue. It is no secret that the current state of the economy is in a precarious position. PTI has continued to accuse previous governments of bequeathing a mismanaged economy, but now after one year, it should take the responsibility rather than indulging in blaming others. Pervious government can’t be solely held responsible for the trade deficit. Facing the possibility of default, the PTI government approached the International Monetary Fund (IMF) and succeeded in approving a three-year bailout package worth six billion dollars programme to help stabilise the economy and introduce macroeconomic reforms. The government agreed under the programme to increase energy prices; generate more taxes; introduce a market-determined exchange rate; allow central bank’s full operational independence and focus on inflation instead of growth. Also, the provinces would have to create more cash surpluses to support federal governments’ fiscal stability.

Pakistan has a ballooning balance-of-payment crisis (its foreign exchange reserves are enough to cover just about two months’ worth of imports), its budget deficit (at 8.9 per cent of GDP) is the highest in about 20 years, its liabilities (at over Rs 40 trillion) exceed the size of its economy and manufacturing growth (at 3.6 per cent) is at a decade low. The manner in which the rupee was allowed to go in a free fall has lost over a third of its value compared to the US dollar in the last year. Foreign direct investments have fallen 60 per cent, compared to last year. It was forced to borrow $16 billion in 2018-19 to avoid running out of foreign currency. Pakistan’s economy has shrunk while credit rating agencies have decreased Pakistan’s ranking. The stock market is the lowest in all times of history; foreign reserves are falling and inflation is rising. The burgeoning fiscal and current account deficits have not helped matters.

Then, came accountability. On the name of accountability, both opposition parties’ leaders are in jail. Yet, most convicted people are free because they belong to the ruling party. Khan was an outspoken opponent of drone strikes by the US in Pakistan’s tribal areas. Just last week, the US claimed to have killed Osama bin Laden’s son in the “Afghanistan /Pakistan region” (the killing of Osama had raised questions over sovereignty in Pakistan).

Imran Khan promised and mentioned in the party’s manifesto about the local government structure. The PM constituted a committee to recommend a proposal for new local government but after one year, the government only approved the draft of Punjab’s new local government system, which besides truly empowering the common man through the devolution of power to the lower tiers, will also help resolve the local problems quickly and transparently and make the sustainable development possible. Under Punjab’s new local government system, 22,000 panchayats will replace 3,100 UCs in the new system. This will broaden the scope of public representation. The progress on the creation of South Punjab province front has largely been unsatisfactory if one considers working groups and task force as a key development will be down to creating consensus all across Punjab and seems a long way off at the moment. The cold war within PTI is delaying the South Punjab cause. Thousands of activists, belonging to different political parties, took out rallies and held protest demonstrations across Sindh against the formation of Karachi Committee and Article 149 implementation plot, which aims to control Karachi, the metropolis of Sindh province under the banner of the transformation of Karachi. On the foreign policy grounds, Pakistan has received a lukewarm response from the Muslim world and the international community on the happenings in IOJ&K. PM has tweeted 95 times since August 5. As many as 71 tweets have had reference to India.

Summing up the debate, the government of PTI has failed every standard, it vowed to keep. It pledged to the safety of minorities, while forced conversions and attacks on minority neighbourhoods continue. It promised the freedom of expression, while press rots in shambles after the revocation of advertisement and backbone of journalism i.e. reporters are unpaid for months now. The government promised to replace the prime-minister house with a university and then went back on its words. It promised reforms in civil services and police, instead, the old system continues to prevail. It promised a vast housing scheme while a single house is yet to be built. It promised across the board accountability, but what it is delivering is the persecution of the opposition. In short, what to speak of the expectations of people, the government has failed to live up to its standards.

The writer is working as a research officer at CPGS