Imran reaches US to speak about IHK, contemporary issues at UNGA 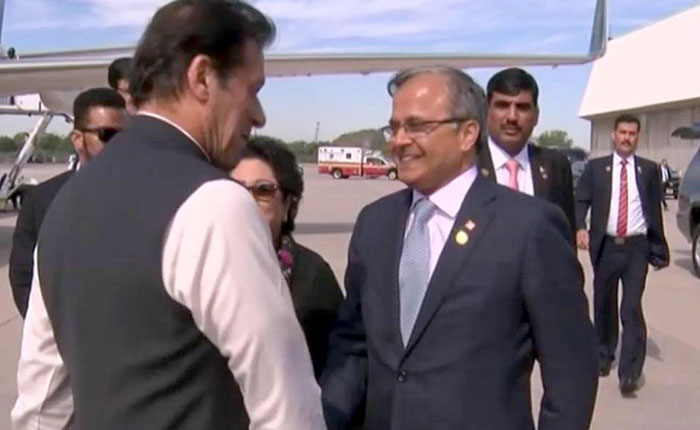 Prime Minister Imran Khan has reached the United States to highlight the situation in Indian-held Kashmir at the UN General Assembly session and other forums.

He had left for the US after wrapping up a visit to Saudi Arabia. According to the Foreign Office (FO), Imran will lead the Pakistani delegation during the high-profile week of the UN General Assembly session in New York from September 21 to 27.

“The prime minister will deliver his address to the UNGA on Friday, September 27, and share Pakistan’s perspective and position on the Jammu and Kashmir dispute and its current human rights and related dimensions,” an FO statement said, adding that the premier would also articulate Pakistan’s perspective on some key contemporary issues.

“Overall, the centrality of the Jammu and Kashmir dispute would be emphasised through myriad engagements,” it added. The FO said the prime minister would hold several bilateral meetings with his counterparts from various regions and participate in high-level UN summits on climate change, sustainable development, universal health coverage and financing for development. “The prime minister will also attend and speak at side events co-hosted by Pakistan and Turkey on countering hate speech, and on environmental protection and poverty alleviation co-hosted by Malaysia and Pakistan,” read the statement. “A trilateral summit meeting of Pakistan, Malaysia and Turkey will be held on the General Assembly sidelines,” it added.

According to the FO, the premier would also interact with a cross-section of international media outlets and hold meetings with editorial boards. “The prime minister’s speaking engagements at leading think-tanks and meetings with heads of major international human rights organisations are also envisaged,” the FO said.

Foreign Minister Shah Mahmood Qureshi would also attend the UNGA session, interact with his counterparts from various countries, and address important ministerial meetings, especially the OIC Contact Group on Jammu and Kashmir, according to reports.