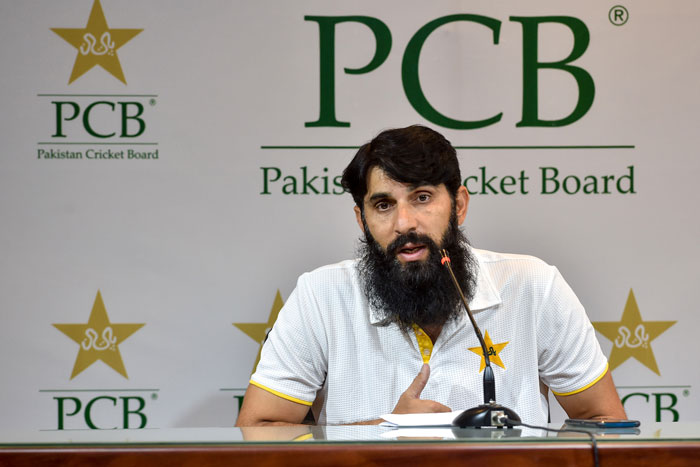 Pakistan cricket head coach and chief selector Misbahul Haq on Saturday named a 16-member squad for three ODIs against Sri Lanka to be played from September 27 to October 2 in Karachi. Abid Ali, Iftikhar Ahmed, Mohammad Nawaz, Mohammad Rizwan and Usman Shinwari have earned recalls. “The squad for the three T20Is against Sri Lanka in Lahore will be announced during the one-day series. Until then, the other players in the probables camp will continue to train at the NCA,” Misbah told reporters at a press conference. Two forced changes had to be made after fast bowlers Shaheen Afridi and Hasan Ali were ruled out due to illness and injury respectively. Afridi is down with dengue fever while Hasan was ruled out because of back spasm.

“After thorough discussions with the members of the selection committee and meticulous planning, I feel we have put together the best possible squad. These are the only 50-over matches we play this season and we want to make their optimum use. Over the course of my cricketing career, I have realised there are no easy games and there are no easy opponents in cricket. But, a season-opening series is crucial for setting the tone. It is extremely important that we produce solid performances and have favourable results as it will build the confidence of our players and help in carrying the momentum Down Under.”

He said the five boys who had been recalled were straightforward selections. “Iftikhar is a batsman who can also bowl off-spin and provides the captain with necessary bowling depth as Sri Lanka boasts a few left-handers in their ranks. Nawaz has been performing well in domestic matches. Despite their strong performances, Rizwan, Shinwari and Abid were unlucky to miss out the World Cup squad. This is, however, a perfect opportunity for these players to prove their mettle in international cricket and cement their place in the one-day side.”

The 29-year-old Iftikhar played just two ODIs against England in 2015 before he had been sidelined mainly because of the presence of two more all-rounders Mohammad Hafeez and Shoaib Malik in the team. Malik retired from one-day internationals after the World Cup in July while Hafeez has received permission to skip the series against Sri Lanka from the Pakistan Cricket Board to play in the Caribbean Premier League. Nawaz, who also bowls left-arm spin, has impressed selectors with his form in the domestic one-day tournament Pakistan Cup and has been recalled after a year. Opening batsman Fakhar Zaman has retained his place in the squad despite the left-hander’s poor show with the bat during the World Cup. “No doubt his (Fakhar) performance has gone down, but still his average is around 47 in ODIs,” Misbah said. “He’s an impact player. He is such a player that if he plays 10 overs, you have a chance to win the match. Instead of wasting him, we should see how we can utilise him in the future.”

Responding to a question on skipper Sarfaraz’s own form as batsman, and his place in the side, Misbah said: “Future is known to Almighty only. Let’s give him a chance. Sarfaraz has worked a lot on his fitness. The biggest mistake was that Sarfaraz didn’t give himself a chance to prove himself as a batsman. If he gives 100% chance to himself, he is a player who can give you performances. Sarfaraz should not underestimate himself as a batsman.” Sri Lanka have already announced two squads for the three one-day internationals and the three T20 matches. Ten senior players opted out of the tour citing security concerns.