* Not that Dust Breeding is a starting point for Julia Bradshaw's exhibition, Survey, at Truckenbrod Pop-Up Gallery
in Corvallis through September 29 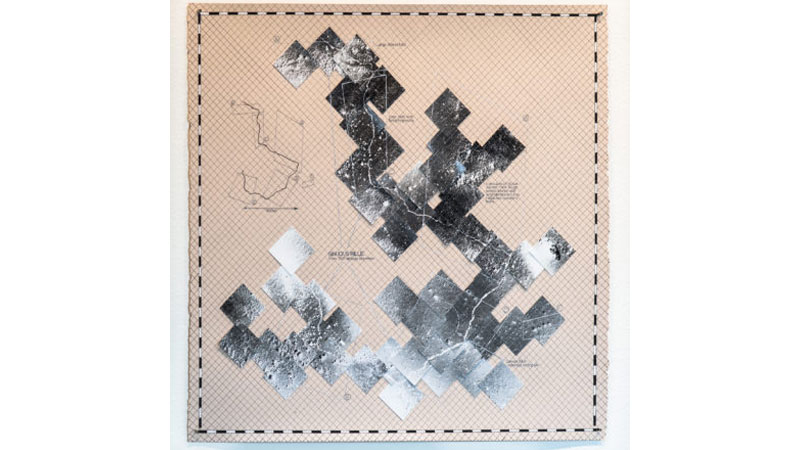 In 1920, Marcel Duchamp invited his friend Man Ray over to his studio to practice documenting artwork with his large format camera. Instead, Man Ray photographed dust that had accumulated on the glass backside of Duchamp’s The Bride Stripped Bare by Her Bachelors, Even. To look at the image, one doesn’t immediately think of a dusty surface but of a barren landscape photographed from miles above.

In fact, Man Ray said as much after he published the image two years later, describing it as a “view from an aeroplane.” Eventually given the title, Dust Breeding (1), the photograph has been a residual inspiration for generations of artists thereafter.

Not that Dust Breeding is a starting point for Julia Bradshaw’s exhibition, Survey, at Truckenbrod Pop-Up Gallery in Corvallis through September 29. It is merely my unavoidable point of reference. Instead, Bradshaw credits an oversight-not unlike Duchamp’s neglect in keeping a clean studio-for this series of photographs. Discovering an underused darkroom at a residency she was attending, Bradshaw regretted not bringing an analogue 35mm camera along. Fortuitously, she had brought along her pinhole camera. She started a project by taking her own advice to students when teaching the use of a pinhole camera: take an image of a concrete sidewalk.

Still, one can readily see a direct link to Man Ray’s photograph. The grittiness of the concrete taken out of its original context suggests a larger landscape, and perhaps one that is otherworldly. For Bradshaw, she found herself thinking about the long history that photography has with astronomy, particularly James Nasmyth’s 19th century photographs of the moon’s topography. At the time, photographs of the night skies did not work well with telescopes because of an inability to track the movement of planets. Instead, Nasmyth built and photographed models of the moon’s surface. It was this fiction that brought Bradshaw to create her own silver-gelatin prints of interstellar and planetary surface fictions

Like Nasmyth, Bradshaw arranges her photographs by sprinkling dust and detritus about to create her landscapes, and if we didn’t know better, we would think we were looking at actual high-contrast satellite imagery compiled and sent directly to the gallery from NASA. Sinuous Rille from 2671 Altitude Kilometers and Sinuous Rille 170E are laid out on gridded paper, with small diamond-shaped photographs interlocked to create a larger image of a geographic region and its features. However, on closer inspection, it is clear the grid has been hand drawn, and a close reading of the notations include idiosyncrasies that give one pause. One such note on Sinuous Rille from 2671 Altitude Kilometers reads: “Extrusions of vicious volcanic rock. Rough terrain littered with larger blocks and cut by radial and concentric faults.” A “rille” is a fissure on the moon’s surface, and yes, there appears to be a very sinuous one at that. Never mind Nasmyth assumed the craters he observed on the moon were caused by volcanoes, even though we know better now, I do not know if I would ever refer to volcanic rocks as “vicious,” unless I was to do so in a poem, making his observations doubly problematic.

One can readily see a direct link to Man Ray’s photograph. The grittiness of the concrete taken out of its original context suggests a larger landscape and perhaps one that is otherworldly. For Bradshaw, she found herself thinking about the long history that photography has with astronomy, particularly James Nasmyth’s 19th Century photographs of the moon’s topography

Nasmyth’s speculations on causation and his rather subjective word choices, which influenced Bradshaw’s exhibition, are examples of what passes for the language of science in archaic scientific literature. They are the product of fantasy, perhaps associated with why so much scientific nomenclature is tied to ancient Western myth. The language is prosaic, resorting to descriptions that reference other processes. Analogies are taken as facts, which in turn lends itself to a more flowery language, and by extension allows further manipulation of that language by an artist.

Just as Bradshaw claims that one rille was photographed from an elevation of 2,671 kilometers, she has fun in creating other fictional “observations.” Evidence of a Lava Tube, has a note suggesting a seam in the concrete could be a “potential site of an astronaut habitat shelter.”

Graphic details serve to accomplish the same end. On Sinuous Rille 170E, she has correlated a drawing she has made with features of a rille, yet any features that merit such demarcation seem to be lacking. The marks do, however, create a nice formal element to the overall piece. Bradshaw takes things a step further for SW 56.427.23 on which she has drawn a number of arrows, graduated circles, and symbols that seem to indicate a rotational aspect to the area captured. All nonsense, no doubt, but very illustrative and therefore seemingly important nonsense.

The manner in which Bradshaw has installed her images in the gallery (particularly toward the back walls) along with the tinting of some images, is a further indication that this is not a dry presentation of scientific data and illustrations. The hanging is staggered, some pieces high on the wall, while others are below the standard 60-inch center. They create an ambiance that is not unlike sitting back in planetarium auditorium to watch the heavens play out above and around us.

These fictional topographies have some degree of relevance to reality, especially when one thinks of the universe and the scale of geologic possibilities found therein. Just as a monkey at a typewriter for eternity will eventually pound out Shakespeare, Bradshaw has created images that may very well exist somewhere in the universe, whether it be in one’s backyard or 100 light years away. That potentiality aligns the non-specific with concrete reality, and provides an assurance that we stand a chance of knowing that which is yet unknown, which is, in fact, the creative process.

Finally, Bradshaw chose to name this exhibit Survey as a double entendre. In the back room of the gallery she has set up a series of art books she has created over the years, often as documentation of a photographic series she has put to bed. For brevity’s sake, I will only say that these wonderful pieces demonstrate the same attention to detail and craft as the work in the front of the gallery.

Truckenbord Pop-Up Gallery in Corvallis, while initially established as a pop-up exhibition space, is now in its second year of operation. Named after and operated by pioneering digital artist Joan Truckenbord, it has quickly become an important cultural center for Corvallis, presenting the work of local and regional visual artists along with, music, poetry, and lectures. Upcoming events include: Acknowledging Climate Science Letter Writing Activity, 1-4 pm Saturday, September 21; Poetry Open Mic hosted by Jana Svoboda, 7 pm Thursday, September 26; classical guitar concert by Jon Sharp, 2 pm Saturday September 28. Full disclosure: this author has an exhibition at the gallery in the spring of 2020.