The first edition of Lyari Literature Festival kicks off 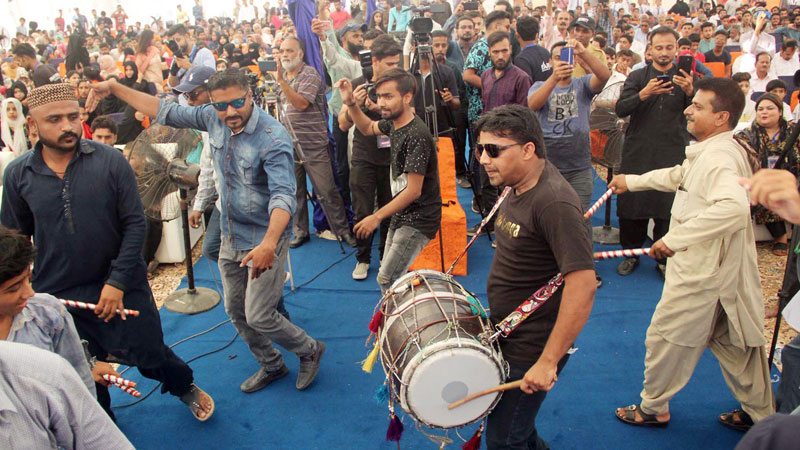 The first-ever Lyari Literature Festival kicked off on Saturday and shall continue until today (Sunday) at Benazir Bhutto Shaheed University, Lyari Karachi, where over 90 speakers will address in 23 sessions over a span of two days.

Also, at least 11 artists will perform during these two days and it is very much local art in different ways.

“The LLF’s theme is to promote peaceful, safe universities and social harmony through literature, art and culture,” she said.

It was announced by Lyari Literature Festival Programme Manager Sadia Baloch at Mehrdar Art & Production, that the two-day festival is the start of another journey of Lyari with the revival of its real colours and face which is artistic, friendly and literary.

She said the Benazir Bhutto Shaheed University, Lyari (BBSUL) proved its role through their complete support. A large number of young volunteers from different parts of the city along with the students of BBSUL have engaged dedicatedly to make the event successful.

She appreciated the role of BBSUL and all the partners and participants.

Program Coordinator LLF said that the event is first but not the last one. The continuation will explain the role of this initiative, support of university and appreciation of public not only from Lyari but all over Karachi and other parts of the country such as Balochistan and remaining districts of Sindh.

LLF’s key aims are promotion of safe universities, to promote peace and social harmony through art and literature, present the real literary and the artistic face of Lyari and Karachi and to support a peaceful environment in universities are the main objectives.

She said that in these two days we have a friendly boxing match (girl vs boys), Mushairas (both days), Musical performances and traditional Lewa Dance will entertain masses. While through panel discussions experts are going to express their opinion and reviews.

The varsity’s vice-chancellor Dr Akhter Baloch said that he believes in the role of universities in not only creating learning academic environment in varsities but also bridging academies and society.