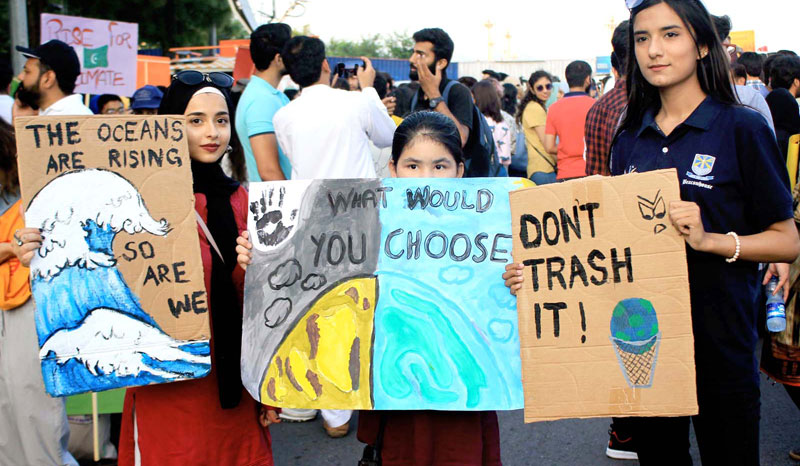 Thousands of Pakistanis in all major cities joined millions of people in worldwide protests calling for action against climate change and demanding their governments take urgent steps to tackle the climate crisis and prevent an environmental catastrophe.

With the aim to save Earth from the worst effects of climate change, thousands of social and climate change activists, students, environmentalists, academics, non-governmental organisation (NGO) members and government officials held climate change marches in all big cities of the country and demanded that the government declare a climate emergency, adopt a low-carbon economy and ensure grass-root level climate adaptation efforts.

In Islamabad, the march started from the National Press Club and culminated at D-Chowk Parade Ground, where the protesters handed over their demands to the government authorities. The participants were holding banners and placards and demanded that the government declare climate emergency in the country wherein a revised national climate change policy should be drafted and citizens should become part of the decision making process.

Speaking on the occasion, Pakistan Humanitarian Forum Country Director and Pakistan-US Alumni Network (PUAN) Country President Syed Shahid Kazmi said the march has been organised by the civil society organisations with an aim to sensitise the government and the authorities concerned about the worst impact of climate change. He said the impact of climate change in Pakistan is increasing with each passing year. He said the issue is of serious nature and need urgent actions to tackle it. The march aims at forcing the government institutions to immediately declare climate emergency and implore them for ‘climate justice’ as it is ‘now or never’ situation, he maintained.

In Lahore, the march was organised at the Lahore Press Club wherein the speakers maintained that without immediate action to reverse climate change, the Earth will become much less hospitable to the modern globalized society. The event attended by people from different walks of life, including representatives of conservation organisations, environmentalists, students, celebrities and passionate citizens with placards in their hands.

In Karachi, protestors began to gather at the Frere Hall at 4pm, and chanted slogans like: “What do we want? Climate justice!”

Some of the first rallies kicked off in Australia’s largest city, Sydney, and the national capital, Canberra. Australian demonstrators called for their nation, which is the world’s largest exporter of coal and liquid natural gas, to take more drastic action to reduce greenhouse gas emissions.