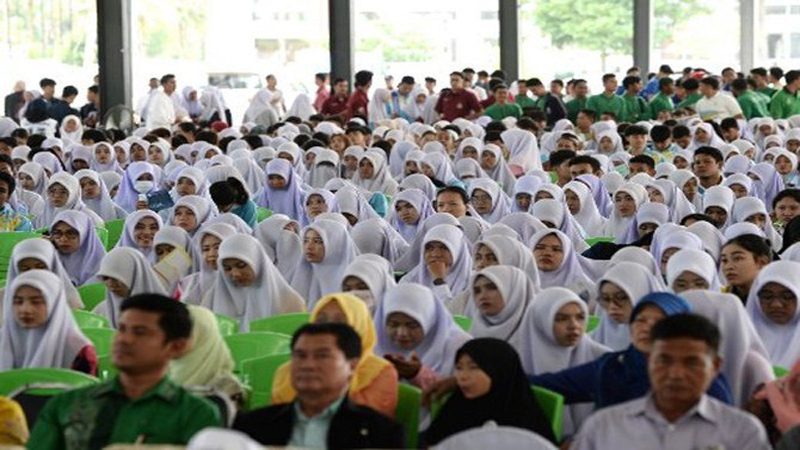 A Thai Muslim student group Wednesday called for police to drop an order requesting universities to provide “intelligence” on Muslim students and their activities in the Buddhist-majority state.

Muslims make up Thailand’s second largest religious group, with the majority residing in its three southernmost states, which since 2004 have been in the grip of a conflict between Malay-Muslim separatist rebels and Thai authorities.

Rights groups have long accused the state of heavy-handed sweeps of the majority Malay-Muslim population in that region — which is under martial law.

The news sparked immediate outrage from the community, and the Muslim Students Federation of Thailand on Wednesday called for parliament to “cancel” the request.

The Special Branch’s order “is also a form of discrimination that breaches the constitution,” president Ashraf Awae said, speaking outside parliament.

Such “groundless accusations… could create divisions among the Muslim students and others in the university and society,” he said.

He added the federation had already heard of police requesting information on Muslim student groups from at least three major universities.

Junta chief-turned-prime minister Prayut Chan-O-Cha on Tuesday defended the Special Branch, and denied creating a “database” would be a violation of people’s rights.

“We can’t arrest anyone if they don’t do anything wrong,” he told reporters.

“This is state-sanctioned discrimination,” he told AFP, adding that the Thai constitution explicitly prohibits discrimination toward different religions and ethnic groups.

“It could feed into radicalization of Muslims in the deep south and worsen the conflict,” Sunai said.

The ex-general had masterminded a coup in 2014, leading a five-year junta regime before elections in March formally installed him as a civilian premier thanks to a new constitution tilted to the military.

Under Prayut’s tenure as junta head, police had rounded up at least 50 Thai Muslims, mostly university students, in a dragnet operation in October 2016 that authorities justified was necessary to stop a suspected car bomb plot.