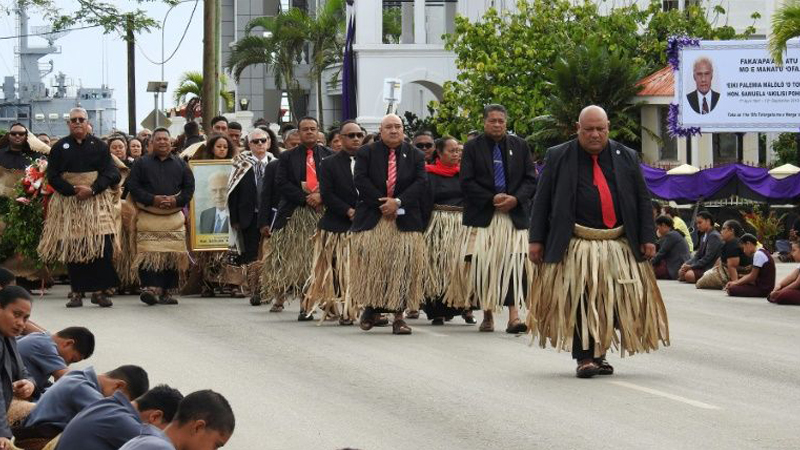 Tonga declared a public holiday and national day of mourning for Pohiva’s state funeral, which saw members of the royal family join crowds packed into the city’s Wesleyan Centenary Church.

Children in school uniforms waited patiently along the roadside to pay their respects as a hearse carrying Pohiva’s flag-draped coffin passed by.

They were joined by adults wearing ta’ovala, the traditional Tongan straw mat wrapped around the waist, many carrying large pictures of the man who fought for decades to get them a vote.

Others bore signs honouring Pohiva, one reading “Rest in love PM, my hero”.

Pohiva, a former history teacher, began his push for democracy in the mid-1970s, when Tonga was an absolute monarchy dominated by the royal family and nobles.

He was elected to parliament in 1987 and in 2014 became the country’s first popularly elected prime minister after reforms that gave ordinary voters more say in their government.

Regarded as the elder statesman of Pacific politics, Pohiva had suffered from ill health for years and died in Auckland last week after being airlifted from Tonga to receive treatment for pneumonia.

His body was flown back to Nuku’alofa this week and lay in state for two days before being buried at Telekava Cemetary after the service.

In Wellington, New Zealand’s Acting Prime Minister Winston Peters said Pohiva had been unwavering in his commitment to democracy, even when he was jailed for his beliefs.