‘Too awful’: Anger at acquittals in Fukushima case 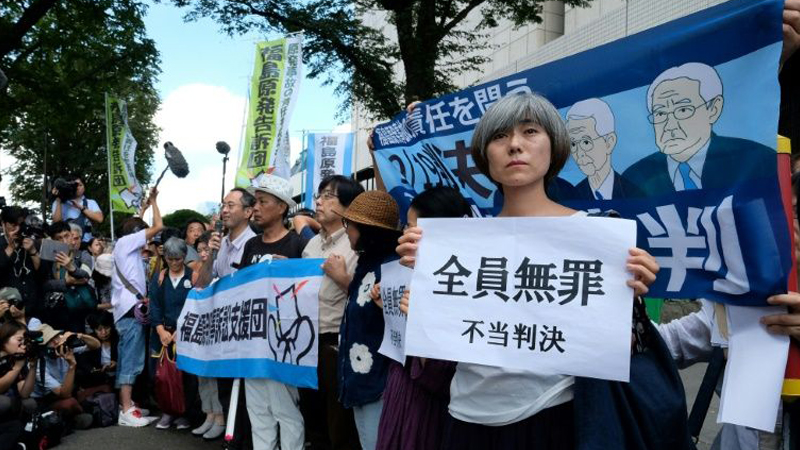 As a Tokyo court pronounced three former executives not guilty in the only criminal trial over the Fukushima nuclear disaster, a woman’s voice cut through the silence from the gallery: “Unbelievable!”

More than eight years after the worst nuclear accident since Chernobyl, only three people have faced criminal prosecution in relation to the Fukushima disaster, and their acquittal Thursday left victims angry and distraught.

“This is extremely, extremely frustrating,” said Ayako Oga, who evacuated to Japan’s Niigata region from Fukushima in the wake of the disaster.

“We cannot understand it,” an elderly woman said, her voice breaking as she addressed the crowd, clutching a microphone.

“In these eight-and-a-half years, so many people were forced to leave their houses… and they remain displaced and unable to decide where to live,” she said.

“How would you feel if your house, today, were taken away from you?”The tsunami triggered by an earthquake that swamped the Fukushima nuclear plant on March 11, 2011 left more than 18,500 people dead or missing.

No one is officially recorded as having been killed by the nuclear accident itself, but tens of thousands of people were ordered to evacuate, with many more fleeing of their own accord, afraid of radiation that rendered whole towns off-limits.

Parts of the region remain uninhabitable, and may be so forever. Even where decontamination has been completed and evacuation orders lifted, many residents have been reluctant to return.

“I couldn’t be more angry,” a man who evacuated from Fukushima told supporters at a rally after the verdict was announced.

“We can’t go back to our normal lives,” he added.

“Those who were at the top of the company at the time must be prosecuted!”

‘It’s about our dignity’

Akihiro Yoshidome, an 81-year-old anti-nuclear campaigner from Tokyo, said he was astounded by the decision.

“I had braced myself that we might not get a clean victory, but this is too awful,” he told AFP.

“This shows Japanese courts don’t stand for people’s interest. This can’t be true.”

The path to the criminal trial was fraught, with prosecutors twice declining to bring the case to court, citing insufficient evidence and a slim chance of conviction.

In 2015, a judicial review panel composed of ordinary citizens ruled that the three executives should face trial however, forcing prosecutors to proceed with the case.

But the case turned on a narrow question: whether the executives would have been able to predict the risks of a tsunami engulfing the plant and should have ordered better safety measures as a result.