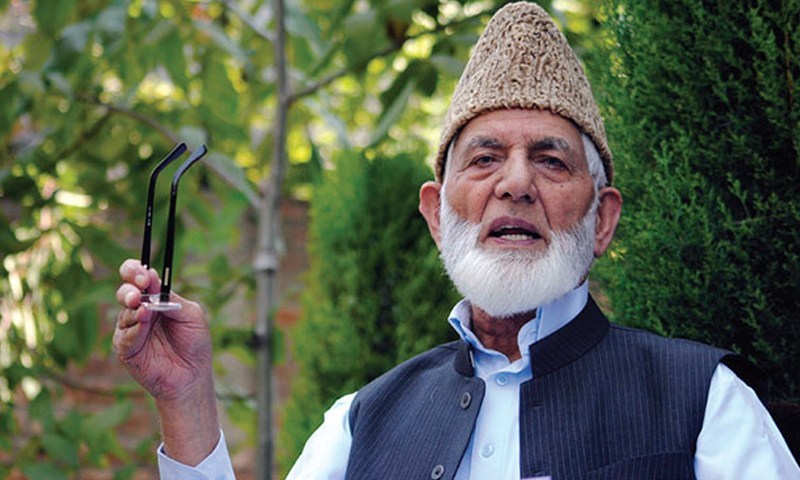 ISLAMABAD: The occupation authorities in Held Kashmir(IoK) disallowed the Chairman of All Parties Hurriyat Conference, Syed Ali Gilani, from holding a press conference at his residence in Srinagar on Thursday.

According to Kashmir Media Service, Due to suspension of communications means, Syed Ali Gilani, had invited the media persons through letters. However, when the media men reached his home, Indian policemen deployed there stopped them from getting in and asked them to leave. Syed Ali Gilani was under continued house arrest since 2010.

APHC leader and the Chairman of Tehreek-e-Muzahamat, Bilal Siddiqi, in an exclusive interview with Kashmir Media Service, today, said that situation in occupied Kashmir was extremely grim and people were not safe even in their homes. He said that the people of occupied Kashmir had been engaged in prolonged mass uprisings in 2008, 2010 and 2016. However, he added, this time around they are not being allowed to hold big demonstrations to express their resentment and whenever they are able to assemble they are subjected to pellet firing. The APHC leader appreciated the role being played by Pakistan in highlighting the miseries of the people of occupied Kashmir at the international level. He said, the recent Indian actions are nothing short of military oppression.

Meanwhile, normal life remained crippled in Kashmir valley on 45th consecutive day, today, due to restrictions and heavy presence of Indian troops. Hundreds of thousands of Indian troops deployed in every nook and corner of the Kashmir valley continue to keep millions of Kashmiris confined to their houses to prevent anti-India demonstrations. Markets, business establishments, shops and educational institutions continue to remain closed and transport off the roads. Communications links like internet and mobile phone services are still snapped and TV channels closed in Kashmir valley and Muslim majority areas of Jammu region.