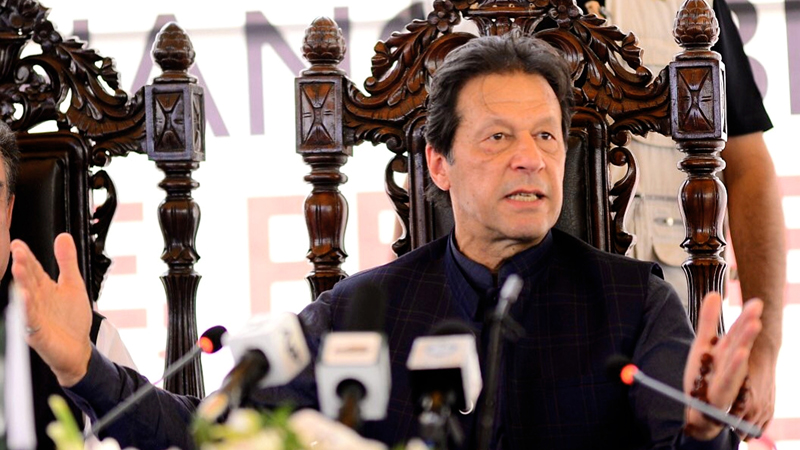 Prime Minister Imran Khan Wednesday said he will urge US President Donald Trump next week to revive peace talks with the Afghan Taliban.

Trump abruptly canceled secret talks with the Taliban at his Camp David retreat that were planned for Sept 8 and has since said the talks are ‘dead’.

“It will be a big tragedy if these talks don’t make headway,” the prime minister said at a ceremony at Torkham border crossing with Afghanistan. Khan said he will meet Trump in New York on Monday, and will emphasize that there have been destruction and chaos in Afghanistan for the last 40 years. “We will put our best (effort) that these talks are resumed again,” he told a press conference here after inaugurating the new round-the-clock operational Torkham Terminal.

Imran Khan said Pakistan had directed Taliban leaders to participate in earlier peace talks in Qatar and only discovered too late that talks had broken down. He said his next role will have been to convince the Taliban to open talks with the Afghan government.

Describing the current deadlock in Taliban-US dialogue as ‘unfortunate’, the prime minister said Pakistan will make every possible effort for the resumption of negotiations as peace in the region is also in the interest of Pakistan. “If the Taliban-US talks do not move ahead, it will be a tragedy and I will insist on [resumption of dialogue] during the meeting with US President Donald Trump,” he said.

The prime minister recalled his meetings with the leaders of Central Asian states, including Uzbekistan, Tajikistan, Kyrgyzstan, during his visit to Bishkek, Kyrgyzstan, for attending the SCO (Shanghai Cooperation Organisation) Summit in June, who he said were keen to have trade links with Pakistan. Peace in Afghanistan will also help bring peace and economic development in the whole region, he said, adding the opening of Torkham Terminal will help push bilateral trade with the neighbouring country and create job opportunities in Khyber Pakhtunkhwa, which has been badly hit by the war on terror.

The prime minister said since peace and peaceful coexistence are part of his party’s manifesto, his government has tried to have good relations with the neighbours, including Afghanistan, and engaged President Ashraf Ghani for confidence building.

To a question, Imran Khan said he planned to have a meeting with Taliban delegation only after the success of Taliban-US dialogue and the signing of a deal, to bring the Afghan government and Taliban closer.

On the recent situation in Indian-held Kashmir, he said Pakistan will not hold any dialogue with India till the curfew is not lifted in the valley. He vowed that he will forcefully present the case of Kashmiris at the upcoming United Nations General Assembly (UNGA) session in New York. “I promise to fight for Kashmir in a way it has never been done before,” he said.

Imran Khan warned those intending to cross border from Pakistan to India in an attempt to ‘wage a Jihad in Kashmir’, saying it will be an act of extreme enmity towards the Kashmiris. “Anyone who thinks that he will cross the border to join the Kashmiris (fighting for their right) is a big enemy of them and Pakistan,” he said. Any such move on the part of individuals, he said, will help India exploit the situation by calling it cross-border infiltration. “Don’t give India an excuse to cover its human right violations in Kashmir. This can make life more difficult for the Kashmiris, who are already suffering at the hands of 0.9 million violent and oppressive Indian troops,” he said.

The prime minister reaffirmed that his government will not give any NRO (National Reconciliation Ordinance) and safe passage to any corrupt politician and that the accountability process will continue till the recovery of looted public money from them. He said elimination of corruption is imperative for sustained progress and development of the country. “The country cannot make progress unless we eliminate the menace of corruption,” he said, adding that Pakistan was burdened with Rs 24,000 billion loans during the last 10 years due to two NROs given by former president Pervez Musharraf to the corrupt politicians.

The prime minister strongly condemned the recent unpleasant incident of attack at a Hindu temple in Ghotki, terming it a conspiracy and an act of sabotage prior to his address to the United Nations General Assembly. All the minority communities and their holy places are fully protected inside Pakistan and they are free to practice their religion without any fear, he said. “Our religion and the constitution of Pakistan give full protection to the rights of minorities. Founder of Pakistan Quaid-e-Azam had also assured protection to the minorities,” he added.

The prime minister said the government strongly believes in development of merged tribal districts and efforts are underway to bring those on a par with the developed parts of the country. He said the development of tribal districts of erstwhile FATA is top most priority of the government. He said opening of Torkham crossing terminal is a historic initiative that will help promote trade and investment in tribal districts. The prime minister also inaugurated the Pak-Afghan Friendship Hospital at Torkham. According to Radio Pakistan, Afghan patients arriving in Pakistan via the crossing point will be provided medical facilities in the hospital.