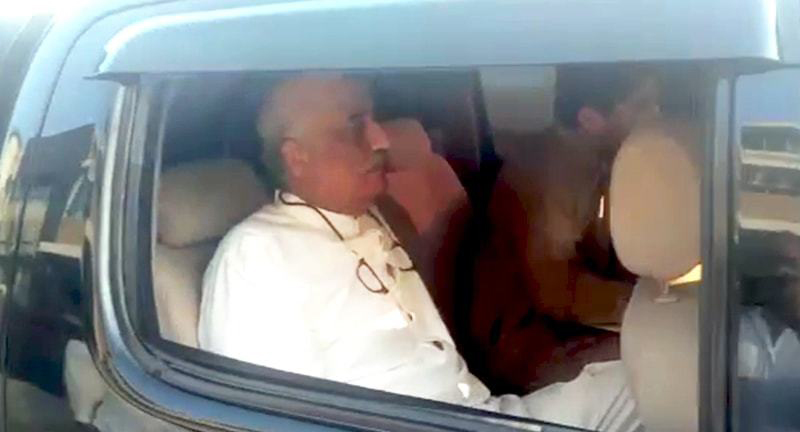 The National Accountability Bureau (NAB) on Wednesday arrested Pakistan People’s Party leader Khursheed Shah in an investigation into the sources of his wealth, the latest high-profile detention of an opposition politician.

The ant-graft watchdog said Shah was arrested in relation to allegations of his assets being higher than his known sources of income. “NAB’s Sukkur chapter has arrested Syed Khursheed Shah over assets beyond means,” the NAB said in a statement.

The PPP stalwart was arrested in a joint operation by NAB’s Rawalpindi and Sukkur chapters, a private TV channel reported. He was taken away by nearly 20 personnel of NAB and police during a raid at his Islamabad residence, the domestic staff at his house said. They claimed that the NAB and police personnel neither allowed any discussion nor let the servants take out their mobile phones before they took Shah away with them.

Sources in NAB said the arrest came after allegations were proven in the initial investigation against the PPP leader.

The PPP leader is accused of illegally allotting to himself an amnesty plot from a cooperative society in Sukkur. The investigation has been ongoing since August 7 and it was alleged that the PPP leader built bungalows, petrol pumps, and hotels in the name of others (benamidaars).

NAB Sukkur had summoned Shah through a letter, however the PPP leader wrote back to the authority, declining to appear before it.

Reacting to the development, PPP Chairman Bilawal Bhutto Zardari said the ruling Pakistan Tehreek-e-Insaf’s behaviour towards its opponents and critics is ‘reminiscent of Salem witch trials’.

In a statement, Bilawal condemned the PTI’s attempt to launch a witch-hunt against media too after having entangled the opposition leaders through the anti-graft watchdog. “The way the PTI deals with opponents and critics is based on frivolity and falsehoods … the PTI’s narrative is right out of Goebbels’ propaganda playbook,” he said.

PPP leader Sherry Rehman said Shah, an MNA, was arrested while the National Assembly session was underway without intimating the NA speaker to “further your condemnable objectives”. “On one hand we say that the law of jungle is prevailing in the world through which Kashmir is being subjected to state oppression; it appears that something similar is happening here,” she said.

Sindh Chief Minister Murad Ali Shah, another PPP leader, termed Shah’s arrest a ‘very wrong step’ on the part of the government. “Had Khursheed Shah sahib run away from the country? Had he refused to attend any inquiry against him?” he questioned, adding that the arrest will harm the expression of unity that is currently required of the nation.

Senator Murtaza Wahab said several federal ministers are facing inquiries but they have not been arrested.

“Whoever criticises the government gets arrested,” he said.