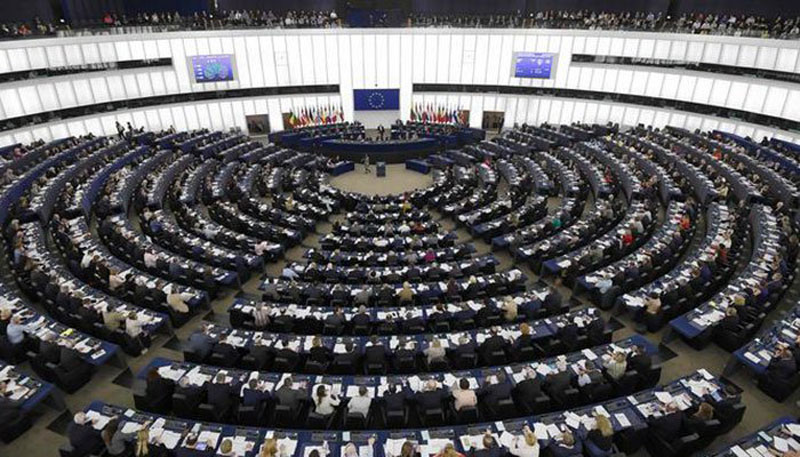 STRASBOURG: Members of the European Parliament on Tuesday strongly censured the Indian government’s continuous obduracy in denying the Kashmiris their fundamental right to self-determination as guaranteed by the United Nations Security Council resolutions.

Council of the European Union’s Tytti Tuppurainen who read out a statement on behalf of the Vice-President of the Commission/High Representative of the Union for Foreign Affairs and Security Policy, on the situation in Kashmir, said India’s steps on August 5, continued to violate the fundamental human rights in the Occupied Kashmir.

India had deployed additional troops in the occupied valley besides, the Line of Control.

She said since then the situation had not returned to normalcy as reports were pouring out about the arrests of political leaders and students.

She stressed upon the European Union to work with Pakistan and India to defuse further escalation and engage both parties for a peaceful settlement of the dispute in accordance with the wishes of the Kashmiri people.

She added, restrictions imposed by Indian on the fundamental rights were of grave concerns to them and the European parliament high representative had already taken up the issue with the Indian external minister in Brussels.

“The European Union should demand lifting of the restrictions by restoring basic human rights, restoration of all social services and freedom of movement, Tuppurainen said, adding no one could afford another escalation over occupied Kashmir.

Concluding her statement, she said the EU would continue to monitor the situation and stressed upon the EU to make every effort to avoid escalation in the region.

Traian Basescu of the Group of the European People’s Party (Christian Democrats), categorically termed the situation in occupied Kashmir as alarming and unacceptable.

He said the continuous trampling of the fundamental rights of the Kashmiri people continued unabated in the occupied valley and warned that due to escalation two nuclear-armed powers were in head to head conflict.

Group of the Progressive Alliance of Socialists and Democrats in the European Parliament’s Maria Arena also expressed concerns over arrests in the occupied valley where the hospitals and houses were running out of basic needs including medicines and foodstuff.

The deployment of ten million Indian soldiers had turned the valley into world’s highly militarised zone whereas rapes were committed by the Indian forces.

She warned that the situation was made more dangerous by Modi’s government after it revoked the autonomous special status of occupied Kashmir.

Shaffaq Mohammad of the Renew Europe Group said being a Kashmiri himself, the situation in the occupied Kashmir pained him greatly.

“Kashmir was in real crises as the sufferings of the local people had been surging,” he said.

Mohammad called upon the EU which proudly stood for human rights to secure the rights of the Kashmiri people and play its role for the security and stability of the region.

He demanded that Kashmiris should be allowed to exercise their right to self-determination.

Moreover, Group of the Greens/European Free Alliance’s Gina Dowding also voiced concern and said the EU could be a facilitator in the process by pulling them out of the darkness.

She said there were serious reports about rapes and unlawful detentions by the Indian forces in the valley which were also appalling.

“Mobile phone services were shut down and there was a complete lockdown,” she said, stressing that the EU should demand that these human rights violations should be stopped not for the Kashmiris living in Indian occupied Kashmir but also for those hundreds of Kashmiris living in the UK.

She demanded the restoration of all the basic rights of Kashmiris and urged the EU to play its role in ending the crises.

Bernhard Zimniok of Identity and Democracy Group maintained that the Kashmir dispute remained unresolved in the last seventy years with the occupied valley witnessing countless deaths.

“The EU could support the peace process to resolve the issue between the two countries,” he said.

Confederal Group of the European United Left’s Idoia Villanueva Ruiz stressed upon peaceful resolution of the Kashmir issue in accordance with the international resolutions.

Richard Corbett, Group of the Progressive Alliance of Socialists and Democrats in the European Parliament, said that the coercive step taken by the Indian government was a stain on the democratic face of India.

The only viable and permanent solution was to allow the Kashmiris their right to self-determination in line with the UNSC resolutions after the issue was taken by India to the UN.

He also demanded implementation of those resolutions.

Phil Bennion, another member, also demanded the lifting of the curfew and release of all the political leaders in the occupied Kashmir.

He demanded that the EU delegation should be allowed to visit Indian occupied Kashmir.

European Conservatives and Reformists Group’s Nosheena Mobarik said the EU always upheld the basic principles in treaties, so it should also press for implementation of UN resolutions on Kashmir.

She held India responsible for its bellicose attitude and destruction in occupied Kashmir.

She further called upon the EU to set aside its apathy and ensure the Kashmiris their right to self-determination which was denied by India.

Giuliano Pisapia, Group of the Progressive Alliance of Socialists and Democrats in the European Parliament, Anthea Mcintyre and other members also stressed upon hectic diplomatic efforts on part of the EU to resolve the decades-old dispute which could destabilise the whole region.

Referring to the UN human rights commission reports about human rights violations in occupied Kashmir, they lamented that these violations continued with indiscriminate use of pellet guns against innocent people including infants.

No one was held responsible for maiming and killing of innocent people.

Sylviane H Ainardi particularly mentioned that Kashmir was a disputed region as recognised by the UN and said that it was incumbent upon this house to uphold fundamental rights of the Kashmiris.