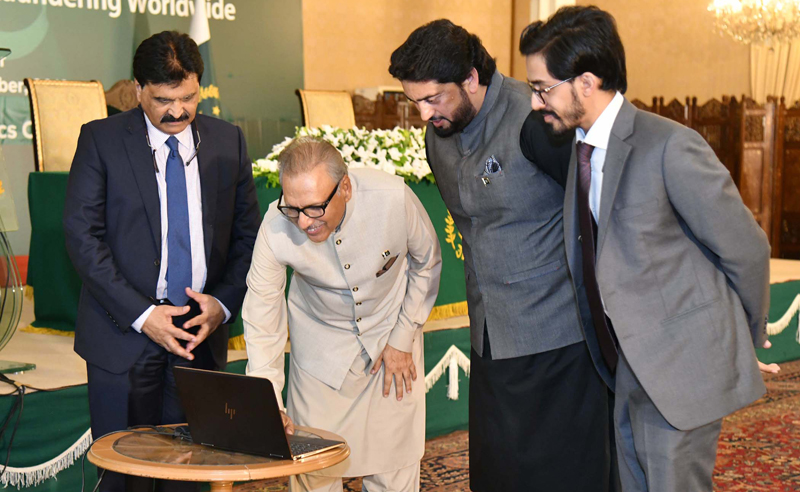 Addressing the launching ceremony of ‘Am’aan’ project, an artificial intelligence-based data system, at the Aiwan-e-Sadr, President Alvi said narcotics prevalence across the globe still poses a threat to the human lives, and stressed the need to focus on the preventive methods to keep the drugs out of the reach of addicts as long-term curative measures. He said the narcotics control is still a complex challenge for the world as billions of dollars are being spent over it. Appreciating the efficacy of the ‘Ama’an’ project, the president said it was a much-needed initiative to tap the artificial intelligence for controlling the drug abuse. He lauded the hard work and dedication of Minister for Narcotics Control Shehryar Afridi and his team over taking a quantum leap in the technological advancement which will help choke illicit drugs trade in the country.

Addressing the audience, Minister for Narcotics Control Shehryar Afridi congratulated all the participants on becoming part of the history as Pakistan goes to launch of the country’s first databank on individuals and organisations involved in crimes related to narcotics and money laundering. “Pakistan Tehreek-e-Insaf (PTI) government, under the vision of Prime Minister Imran Khan, will equip the forces with modern tools and gadgetry to help cleanse the society from all ills and malpractices related to drugs and money laundering,” the minister said. “It is a comprehensive and one of the largest databases on individuals and organizations related to narcotics and money laundering,” he said.

Elaborating the main features of the application, the minister said it is one of the world’s largest artificial intelligence-driven database which captures information regarding individuals and organisations involved in drugs trade and money laundering. “The data in this solution updates in less than 10 minutes. New features of this project are under development which include facial recognition and smart search. This solution will make Anti-Narcotics Force (ANF) one of the most effective forces in the region,” he said.

The minister said the intelligence gathered through the application will also be shared with other law enforcement agencies and government bodies. “We are now monitoring more than 200 global government agencies and have tagged more than 100 drugs and 20+ chemicals that are involved in production of narcotics,” he said. “It is mandatory for Pakistan to take necessary steps to control drug-related crimes. Project Am’aan is designed to tackle the illicit drug trafficking in Pakistan. It collects the data from a variety of local and global sources,” he added.

Afridi said the application performs various operations to transform and consolidate the data into a single repository. “The database is constantly expanded and updated to offer the most accurate results. A team of experts continuously collects, normalizes and validates the data from multiple sources from around the world to ensure the efficacy of the solution,” he added.