Pakistan’s loan programme off to a good start: IMF director 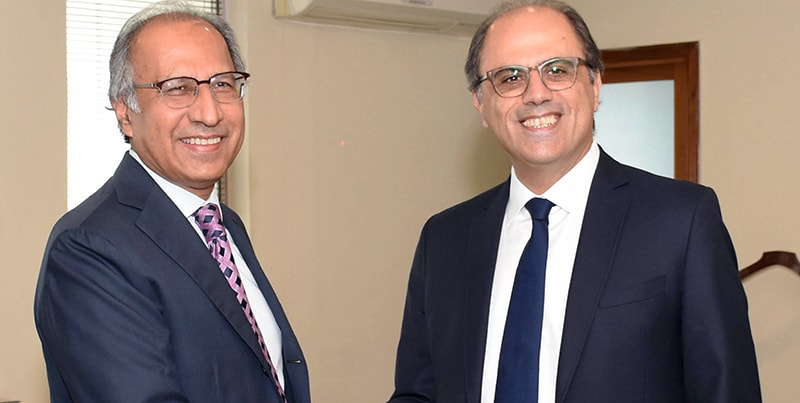 The International Monetary Fund’s (IMF) Middle East and Central Asia Director Jihad Azour on Tuesday said that the $6 billion IMF loan programme had been structured by the Pakistani government itself and its targets “cannot be revised after the lapse of a mere three months”.

Azour arrived in Islamabad on Tuesday along with an eight-member delegation for talks with top government functionaries.

The visit is being described as “routine” by both sides. A Finance Ministry representative said the delegation, headed by Azour and Mission Chief to Pakistan Ernesto Ramirez-Rigo, is here “to review the programme as per schedule”.

Azour, during a press conference held in Islamabad along with finance adviser Hafeez Shaikh, said that the programme had got off to a good start while noting that very little time has gone by since its commencement.

“No changes are being made for the time being to the programme’s targets,” he said.

Azour acknowledged the efforts made by Pakistan in bringing stability to the economic imbalance the country was faced with. He said that adequate assurances by Prime Minister Imran Khan had been provided that the programme would be adhered to and said that this would bring further economic stability to the country.

He also said that a 30 percent increase in revenues reported by the Federal Board of Revenue were encouraging.

“I have come to support the measures taken under the programme to bring in reforms,” he said, noting that the programme was “headed in the right direction”.

He said that he would also hold meetings with State Bank representatives and the business community.

The finance adviser on the occasion said that the government was taking all necessary steps to meet the targets of the programme. He said that institutional reforms were also being introduced to support these efforts.

“The first two months have seen an improvement in interest rates and exchange rates,” noted Shaikh.

In the backdrop of the recent attacks in Saudi Arabia on Aramco’s oil facilities, Azour said that “an uncertain future lies ahead for countries importing oil. Such countries need to reduce their reliance on oil for the production of energy.”

He said that Pakistan’s energy sector needs a complete revamp and stressed on the need to curtail the circular debt in the sector.

To a question, the IMF director said that it was unreasonable to compare Egypt and Pakistan, “which are two completely different countries and economies”. The IMF delegation will visit next in October or November for a review session, said Azour.

The IMF delegation discussed the bailout package and the federal government’s measures during the meeting with the prime minister.

According to reports, the IMF has so far released around $1 billion of the promised $6 billion bailout plan finalised back in July.

Last week, the IMF had said that Pakistan needed to increase its tax revenue in order to fund development.

In a press briefing, IMF Director Communications Gerry Rice said, “One of the key elements of the programme that the IMF is supporting in Pakistan, Pakistan’s programme, is the need to mobilise domestic tax revenue to fund much needed social and development spending while placing debt on a firm downward trend.”

Separately, Imran Khan said that Pakistan was on the positive trajectory of economic progress and prosperity.

Presiding over a high-level meeting on investment in industrial sector, PM Imran said that the government would provide every possible facility to investors and take measures for ease of doing business in the country.

The prime minister said basic utilities like electricity, gas and road access should be provided to SEZs on a priority basis.

He directed Finance, Planning and Commerce Divisions and the Board of Investment to peruse successful investment models of regional countries so as to offer best facilities and incentives to the investors.

Imran Khan underlined that Pakistan is now on the right track of economic growth and in order to attract investments, and stated that the government would provide incentives to potential investors along with ease of doing business.