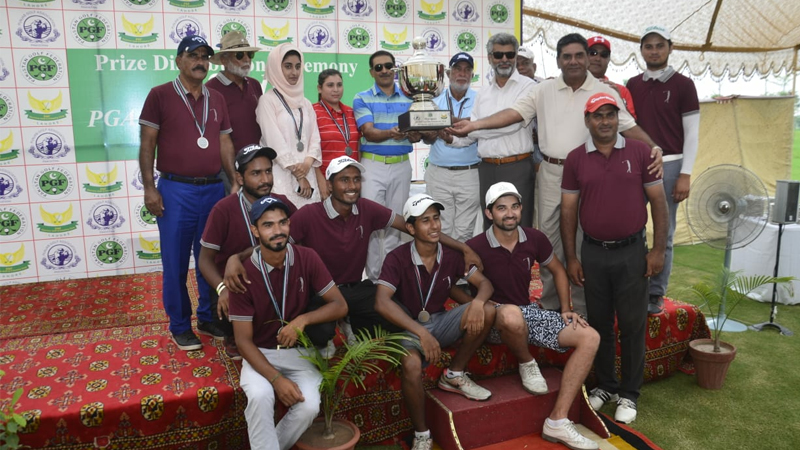 The 2nd Inter Club Golf Championship, organised by the Punjab Golf Association and the Pakistan Golf Federation, concluded at the PAF Skyview Golf Course here after two days of golfing encounter involving the five top golf clubs of Punjab: Rawalpindi Golf Club, Defence Raya Golf Club, Garrison Golf Club, Lahore Gymkhana and PAF Skyview Golf Club. Playing format required that each club team comprised of two golf professionals, four amateur golfers, two junior golf professionals, two junior boys, two junior girls, two women and two senior amateurs. This team mix represented a unique, uncommon and unexampled combination and clubs had to undergo an exercise that required thinking and searching to come up with players of merit especially in the categories of junior girls and boys. Hard work on the part of the clubs yielded a lot of talent and the selected ones geared up to bring laurels for their parent clubs.

The first day of this championship belonged to Garrison Golf Club as their junior girls Suneya Osama and Dania Aziz, and women Zahida Durrani and Ghazala Yasmin, and also their senior amateurs Tariq Mehmood and Col Rustam Ali Chatta accumulated a total of 12 points to give their parent club a generous and uplifting lead. Their competitors from Lahore Gymkhana managed four points while four points went to PAF Skyview and five to Rawalpindi Golf Club. As per laid down format, the junior boys, junior girls, women and senior amateurs were required to play only one round and the team combination of professionals, amateurs and junior professionals were required to compete over two rounds. And thereafter their victory points were to come into reckoning to decide the fate of the championship in the shape of the winner club and the runner-up club.

Performance wise the final round belonged to Lahore Gymkhana as their professionals Shahid Javed Khan and Aadil Jehangir were a reflection of elegance and excellence and produced golfing scores that can be categorized as well crafted and magnificent and lofty. Shahid Javed came up with a round of gross 70 and Aadil Jehangir’s score was an incredible 66, six under par. Lahore Gymkhanas amateurs also resonated champion like form and while Mohsen Zafar concluded the 18 holes with a score of gross 71, his playing mates Salman Jehangir and Ahmed Zafar Hayat gave a notable and profound impression of their playing abilities. All this effort proved in vain as the first days lead carved out by Garrison Club was just too much to be neutralized and the junior professionals of Garrison Muhammad Saqib and Alishah Masih fetched the match winning two points to ensure victory for Garrison giving them an unbeatable tally of 14 points. Lahore Gymkhana had to be content with the runner up position with a tally of 11 points. Rawalpindi Club came third. At the conclusion of the competition, Air Vice Marshal Tariq Zia, Air Officer Commanding, Central Command, handed over the champion team trophy to Garrison Team. The champion team was also awarded a winner’s cheque for Rs 5000,000 by the Punjab Golf Association.