Harming Sindh is similar to harming the federation: CM 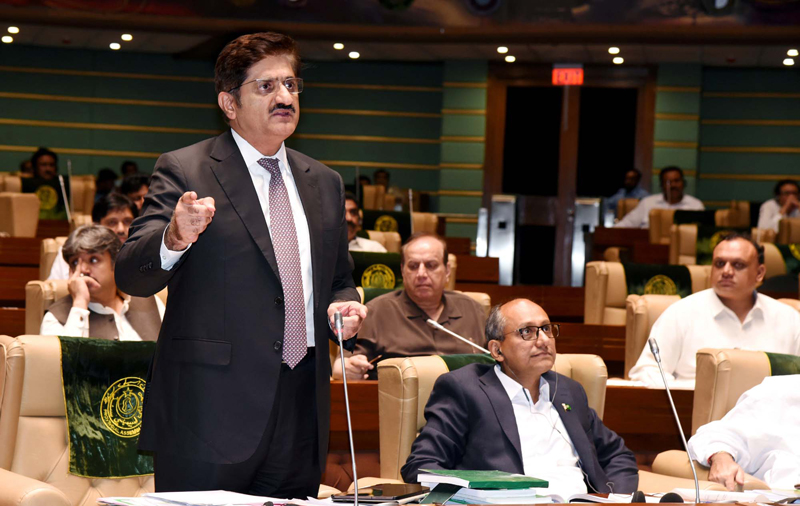 In a charged speech at the assembly, Shah said that people of Sindh and Pakistan People’s Party (PPP) have kept those with separatist ideologies at bay, and forewarned those intending to change the current status of Karachi. “Forming new committees for Karachi is an unconstitutional move, the federal government has no authority to meddle in Sindh’s affairs,” he said.

A resolution against federally approved Karachi committee’s was also put forth and was unanimously approved by the house. Speaker Sindh Assembly Agha Siraj Durrani on September 14 said that federal government can only advise to the provincial government under the Article 149. “It is wrongly assumed that the Centre can control a province under the constitution’s Article 149,” Siraj Durrani said.

Durrani backed a statement of Pakistan Muslim League-Functional chief Pir Pagara about Karachi. He said Karachi should again be made the federal capital, as the city was the seat of the federal government at the time of Pakistan’s creation. Meanwhile, PPP leader Faryal Talpur on Monday during her address in the Sindh Assembly condemned what she called “political victimisation in the garb of accountability”.

Talpur, who is a chief suspect in a massive money laundering scandal, warned that if the “witch-hunt” of politicians and businessmen continues, it would lead the country to an “economic meltdown”.

“The manner in which people have been humiliated and harassed in the name of accountability is regrettable,” she said. “This is not progress of a country or a nation. In fact, this is bringing your country to [the cusp of an] economic meltdown.

Addressing the allegations against herself, Talpur said, “We [the suspects] do not have any problem with these false allegations. We will face them; we have faced them in the past.”

Talpur, a member of the Sindh Assembly, is under the custody of the National Accountability Bureau (NAB), which is probing charges of money laundering against her.

Her production order was issued by the Sindh Assembly last month, but was not complied with. She was produced in the provincial assembly on Monday after the Lahore High Court ordered the administration of Adiala Jail, where she has been detained, to make arrangements so that Talpur would be able to attend assembly sessions.

During her address, she said that the ongoing situation in Indian-held Kashmir was “very bad” and complained that enough was not being done for the residents of the region.

“I have to say this with regret that what is happening [in occupied Kashmir] is very bad and we have not been able to extend any help except for delivering lengthy speeches. They say actions speak louder than words, and there is no action, just words. Neither have we gone to other countries, nor have we asked for help over the Kashmir issue. I feel that for [occupied] Kashmir, there is a lot to be done and should be done, which is not being done by Pakistan.”

She extended her condolences to the families of the soldiers that have been martyred at the restive Line of Control and also expressed hope that the recent extension given to Army Chief Gen Qamar Javed Bajwa would “help stabilise the country”.

“We hope that the extension of the army chief is in the best interests of Pakistan and will help to stabilise this country, which needs to be stabilised. We all should work towards a better Pakistan. We need to be united over a number of issues and stop mudslinging and harassing each other over allegations of corruption,” she concluded.

Speaking during the question hour, Sindh Minister of Information & Archives and Labour Saeed Ghani said that the minimum wage of unskilled labourers had been increased from 16200 to 17500 this year. He said that this would apply to all factories, industrial zones and wherever non-skilled workers worked. Saeed Ghani said that government would ensure the payment of fixed minimum wage to the workers and labourers. He said that if from anywhere else the Sindh government received any information that the workers or the labourers were being paid less than the salary fixed by the Sindh government, the government took action without ado.

Saeed Ghani said that although it was not possible to go to every factory and shop or elsewhere and to check whether the workers were being paid according to the salary fixed by the Sindh government, prompt action was being taken if any complaint was received in this regard. Responding to a question, the provincial minister told the House that the wage board comprised the representatives of not only the labour unions but also representatives of the owners, who keep on pressing the government that whenever it announced any increase in minimum wage, it notified the same without delay. He said that through the labour unions, all employees were always aware of their minimum wages and in addition to that various seminars which were conducted under the Labour Department were the source of awareness for workers.

Saeed Ghani said that new hospitals had been set up under the labour department across the province while the existing hospitals had been upgraded. He said that Rs 52 million had been spent on the entire project. He said that if an organisation took more than eight hours of work from a labourer and did not pay for it, then it can be complained to the Labour Department or Labour Board. He told the Sindh Assembly that under the auspices of sub section 3 of section 9 of the Labour Laws, such a complaint could carry a penalty of six months imprisonment and a fine of up to Rs 20,000 to Rs 50,000. Responding to a supplementary question, the provincial minister said that if a registered worker died during sevice, then under the Workers Welfare Board rules, Rs 5 lakh were paid to his family.