* SAPM says Kashmir not a political matter, rather issue of Pakistan's survival 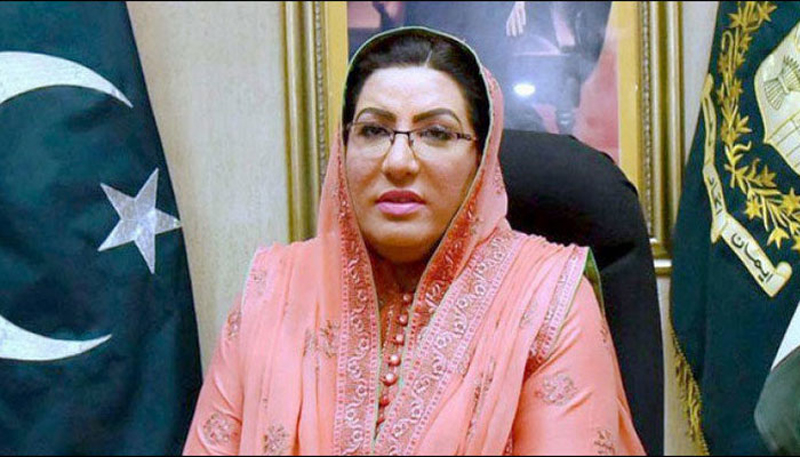 In a series of tweets, she said the government was implementing the agenda of economic reforms under the leadership of Prime Minister Imran Khan and taking steps to invigorate the economy. The SAPM said enhancement of tax revenue and reduction in fiscal deficit were priorities of the government.

She said the government collected Rs 580 billion tax in the first two months of the current fiscal year against Rs 509 billion in the corresponding period last year. She revealed 600,000 new tax filers have been added to FBR network. Firdous said credit for this success went to Prime Minister Imran Khan, who for the first time, transformed tax revenue collection into a national movement.

Firdous said it was for the first time that income of the national kitty, not of rulers, was increasing. This was a good news for the country and the nation, she added. The special assistant said 73 percent reduction in current account deficit was a major achievement.

She said there had been a significant increase in exports and decrease in imports. She said Rs 70 billion have been collected from two cellular companies under license fee, and another Rs 70 billion would also accrue from another cellular company. As a whole, Rs 200 billion will be received from this sector, she added. She said the government was striving to promote economic activities and facilitate the business community.

Firdous said the government has reduced its expenditures. No supplementary grant was approved during the two months, and the government saved Rs 246 billion due to appreciation in the currency value during the last few weeks, she added. The SAPM expressed confidence that the government will be able to collect Rs 1000 billion non-tax revenue this year, which includes Rs 200 billion from cellular companies, Rs 400 billion from profits of State Bank of Pakistan and Rs 300 billion from privatisation of Re-gasified Liquefied Natural Gas plants. Separately, Firdous said the Kashmir issue was not a political matter; rather it was an issue of Pakistan’s survival.

Addressing the Kashmir Solidarity Conference organised by the Mashaikh and Ulema Council Pakistan, she said Prime Minister Imran Khan had been forcefully advocating the cause of Kashmiris at the international level. “His speech at the United Nations General Assembly would be historic as he would represent the sentiments of Kashmiri people.”

The nation was proud that it had a brave leader like Imran Khan who had countered the propaganda of Indian Prime Minister Narendra Modi on the Kashmir issue, she added.

Firdous said every Pakistani should realise that complete unanimity of views on the Kashmir issue was vital to give a clear message to the world community. The nation was witnessing as to what role the political leadership was playing on it, she added. She said millions of Kashmiris across the Line of Control were struggling for their right to self-determination and Pakistan had presented their narrative in front of the whole world.

In the war of ‘Haq-o-Batil’ (right and wrong), she said, the evil forces had to bite the dust. The Indian repression on the Kashmiris was nearing an end, but for achieving that target, all schools of thought would have to form a collective strategy, she added.

She said a large number of Kashmiris resided in her constituency, which was the worst victim of cross-border Indian shelling.

Firdous said the joint statement of Ulema and Mashaikh’s Kashmir Conference would give an effective message to the international community.

Thanking Ulema and Mashaikh for backing the national narrative on Kashmir, she said they had played an important role during the Pakistan Freedom Movement and now they had gathered here for the Kashmiris cause. The special assistant said the entire world community was expressing its grave concern over Indian state terrorism in the occupied valley. The joint statement of Human Rights Council meeting in Geneva and the communiqué of Organisation of Islamic Cooperation condemning Indian human rights violations in occupied Kashmir, she said, were Pakistan’s diplomatic victory and India’s worst defeat.