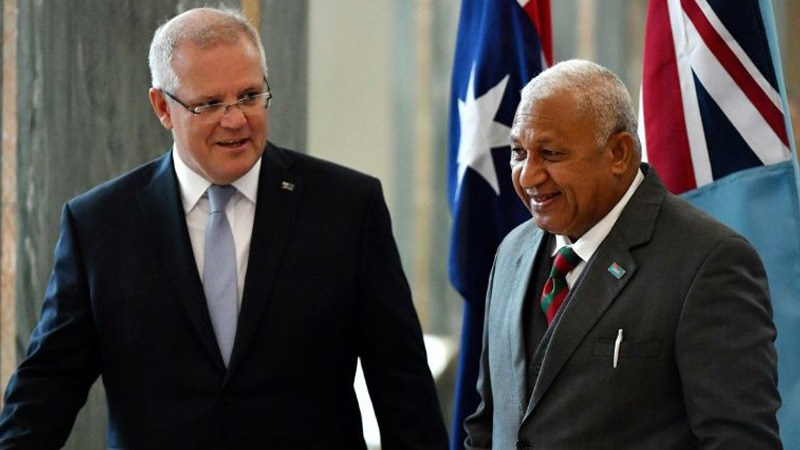 The leaders of Fiji and Australia agreed to boost bilateral ties Monday as they sought to smooth relations following a highly publicised clash over climate change at a Pacific summit last month.

There was uproar at the Pacific Islands Forum after Morrison rejected regional leaders’ demands his government ban new coal mines and coal-fired power plants as part of their call for urgent climate action.

The conservative Australian politician countered that his government was the leading provider of development aid to the Pacific region, drawing Bainimarama’s rebuke.

But the two leaders struck a conciliatory tone at Monday’s bilateral meeting, where they signed a “Fiji-Australia Vuvale Partnership”.

Vuvale –- or family in Fijian -– is “a term of intimacy, it’s a term of family and that’s very much always been the basis of our relationships”, Morrison said.

Bainimarama also adopted a more diplomatic tone in his public comments, saying “members of any family are entitled to their disagreements”.

“No-one expects that our differences can be resolved quickly or easily, but we must never fall down in forging common ground, and common ground is what I intend to seek in our discussion on the issues that impact the lives of Fijian, Australians and all the Pacific people this morning,” he said. The agreement aims to strengthen defence and economic cooperation as well as “people-to-people links”, but little detail was provided.

Relations between Fiji and Australia improved in 2014 when Bainimarama, a one-time coup leader, won a long-awaited democratic election that was followed up by another victory last year.

The former military strongman has become a vocal climate warrior, with his island nation among the countries worst affected by sea level rises.

Lowy Institute Pacific programme head Jonathan Pryke said the two nations’ good relations had been “derailed” by the recent spat and would continue to struggle in the future unless both sides balanced their expectations. “Not all interests in the Pacific are converging,” he told AFP. “If the expectation is to agree on every issue, it’s just not going to happen.”

Australia — one of Fiji’s largest aid donors and trading partners — has revived its focus on the Pacific as part of its “step up” strategy, which aims to counter China’s growing influence in the region.