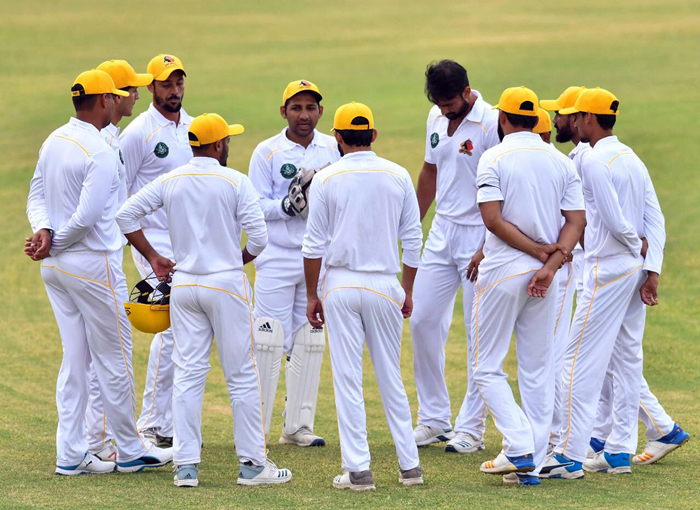 Southern Punjab’s Sami Aslam scored an eye-catching double-century to help his team to 467 all-out in their first innings on the second day of the four-day first-class Quaid-e-Azam Trophy match against Central Punjab at the Gaddafi Stadium Lahore here Sunday. The left-handed opener added 92 runs to his overnight score and remained not out on 243, thus, becoming only the 12th batsman to carry bat in the first-class cricket at Lahore’s Gaddafi Stadium. Sami struck 30 exquisite fours and a six in his epic 601-minute innings during which he received 401 balls. Although Adnan Akmal, who had started the day with Sami in their team’s overnight score of 291 for four, became Waqas Maqsood’s fourth victim very early on the second day, this had no bearing on Southern Punjab’s innings, thanks to a blistering 64 by Aamer Yamin. The all-rounder struck 11 fours in his 67-ball knock, which upped Southern Punjab’s run-rate and got them five bonus points for crossing the 400-run mark inside 110 overs – as per the new playing conditions for the 2019-20 season.

Aamer and Sami put a 100-run stand, which came in as many balls, for the sixth-wicket, before Bilal Asif accounted for the former’s wicket. The last four batsmen scored five runs – all of them coming off Zahid Mahmood’s bat. Waqas, who had taken three wickets in the first session of the match yesterday, remained the pick of the bowlers from his side, finishing with four for 83. Hasan Ali, who picked up Southern Punjab’s last two wickets, finished with three wickets and gave away 100 runs. Only 18 overs were sent down in Central Punjab’s innings as bad-light put an 85-minute interruption in their innings. Azhar Ali and Ahmed Shehzad added 30 runs after the play resumed to take their side to 47 with no loss at stumps.