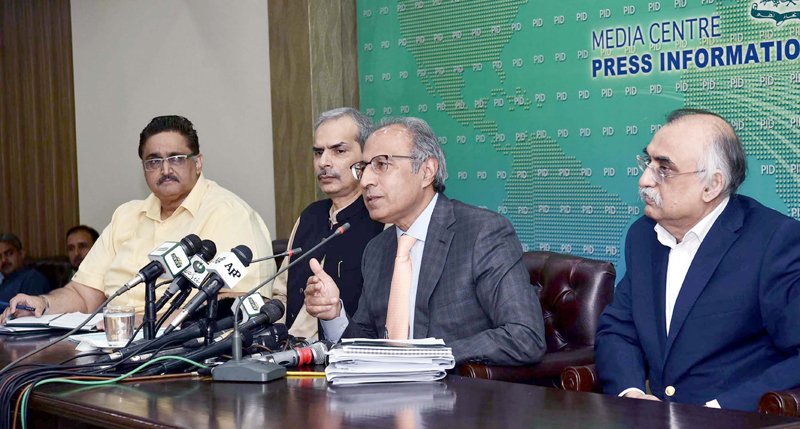 Adviser to Prime Minister on Economy and Finance Abdul Hafeez Sheikh on Sunday said that good effects of tough decision had started emerging and the economy was moving towards stability.

Addressing a press conference in Islamabad, he said that the Pakistan Tehreek-e-Insaf (PTI) government had succeeded in reducing the circular debt to less than Rs 10 billion.

Hafeez Sheikh said when the PTI government came into power the country was heading towards bankruptcy, but under the objective of economic stability, a number of steps were taken to control the dollar reserves, adding that the government expenses were reduced through austerity measures and current account deficit was also reduced by over 70 percent.

The adviser went on to say that 600,000 additional taxpayers were registered. He said a new system had been introduced since August 23 under which speedy refunds were given to the business community. “Now, refunds will be automatically ensured on 16th of every month.”

He said the process of privatisation had been expedited and state-owned enterprises would be restructured in a fast-track manner to improve their performance. He said the government was considering privatisation of National Bank of Pakistan and State Life Insurance for better results.

He said the value of rupee had improved resulting in a benefit of Rs 246 billion in loans. He said Rs 250 billion had been allocated for the development of agriculture sector.

Dr Hafeez further said the government fixed the economic growth target of 2.4, which would be achieved easily due to prudent economic policies of the government.

To a question, he said ease of doing business was top priority of the government.

He said, “The government is providing loans and subsidy to the business community on gas and electricity, due to which exports are on the rise. Businessmen are important for the government, who are vital in provision of jobs.”

Responding to another question, the adviser said merit, transparency, and protection of workers’ rights would be the top priority in the privatisation process. He also made it clear that there was no tax on food items.

He said the government was expecting to see “more than Rs 1,000bn in non-tax revenue” in the coming year.

“In the coming year, we are expecting great leaps and bounds when it comes to non-tax revenue: the government’s earnings through means other than collecting taxes.” Shaikh then proceeded to provide a break up of how he had arrived at the figure. He said that the government had recently received a big injection: Rs 70 billion for the renewal of cellular licences from Jazz and Telenor. “We expect to get Rs 70 billion more from both companies, and expect the equivalent of Rs 70 billion from Zong as well. So this will amount to Rs 200 billion.” Shaikh said that through re-gasified liquefied natural gas (RLNG) plants – whose privatisation is expected by December this year – an income of Rs 300 billion was expected.

“If our exchange rate remains stable, we are looking at Rs 400 billion earned by the State Bank of Pakistan,” he added. “So given all these expected developments, and together with privatisation and other non-tax revenue, we are looking at more than Rs 1,000 billion in non-tax revenue in the coming year,” he explained. He said that with such an injection of funds, the government would be able to decrease its loans and work on public welfare projects.