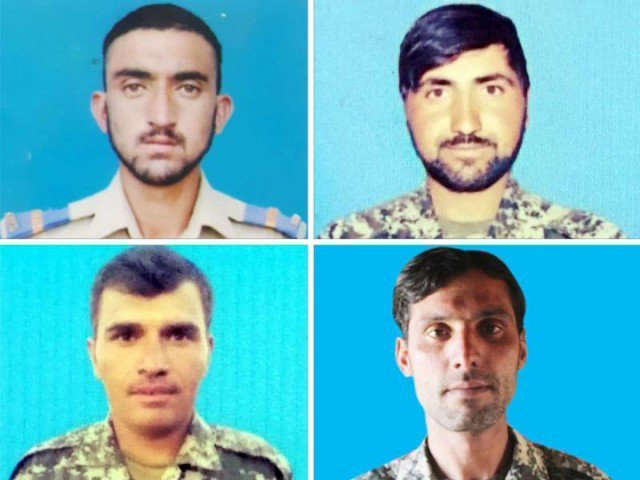 Four soldiers embraced martyrdom and another got injured in two separate firing incidents in tribal areas near the western border, Inter-Services Public Relations said on Saturday.

In the first incident, miscreants fired at a routine patrolling party of security forces near Abba Khel, Spinwam, in North Waziristan. Resultantly, Sepoy Akhtar Hussain, 23, a resident of district Baltistan, was martyred. In exchange of fire, two miscreants were also killed.

The attacks come less than two months after 10 Pakistani armed forces personnel were martyred by militants, six of them in a cross-border attack in North Waziristan district and four others in an assault in Kech district of Balochistan. The ambush in North Waziristan was claimed by the banned Tehreek-i-Taliban Pakistan.

The Foreign Office had last month asked Afghanistan to fulfill its commitment for the elimination of terrorist hideouts along the Pak-Afghan border. “As a matter of policy, Pakistan does not fire across the Pak-Afghan border. Cross-border attacks by terrorists on army/FC posts are responded to in self-defence only,” a foreign ministry statement had said at the time.

Pakistani forces have conducted a series of operations against militant groups in the tribal districts of Khyber Pakhtunkhwa over the years. While officials say the area has largely been pacified, small attacks continue to take place.

Pakistan has been playing role in peace talks between Afghan Taliban and the United States for the peace to return to the troubled region. However, the peace efforts suffered a setback earlier this week when US President Donald Trump announced that talks with the Taliban aimed at ending the 18-year war in Afghanistan were ‘dead’. “As far as I’m concerned, they are dead,” he had told White House reporters on Monday.

Days after the cancellation of talks with the US, the Taliban have sent a delegation to Russia to discuss prospects for withdrawal of American troops from Afghanistan. “The purpose of these visits is to inform leaders of these countries about the peace talks and President Trump’s decision to call off the peace process at a time when both sides had resolved all outstanding issues and were about to sign a peace agreement,” said a senior Taliban leader in Qatar.

Russia, which has hosted meetings between the Taliban and Afghan political and civil society representatives, said this week it hoped that the process could be put back on track and urged both sides to resume talks. “We are convinced that the complete end to foreign military presence is an inalienable condition of durable peace in Afghanistan,” Russian foreign ministry spokeswoman Maria Zakharova had said on Thursday.

The Taliban leader, who spoke on condition of anonymity, said the purpose of the visits was not to try to revive negotiations with the United States but to assess regional support for forcing it to leave Afghanistan.

US and Taliban officials held months of talks in the Qatari capital of Doha and agreed to a draft accord that would have seen some 5,000 US troops withdrawn from Afghanistan in exchange for security guarantees from the Taliban. However, the deal, intended as a preliminary step to a wider peace agreement, faced heavy criticism from the Afghan government, which was shut out of the talks. Many former senior US officials who had worked in the region also warned a hasty withdrawal risked destabilizing the country and even plunging it back into a new round of civil war.