Food on the table the priority for poor Argentines 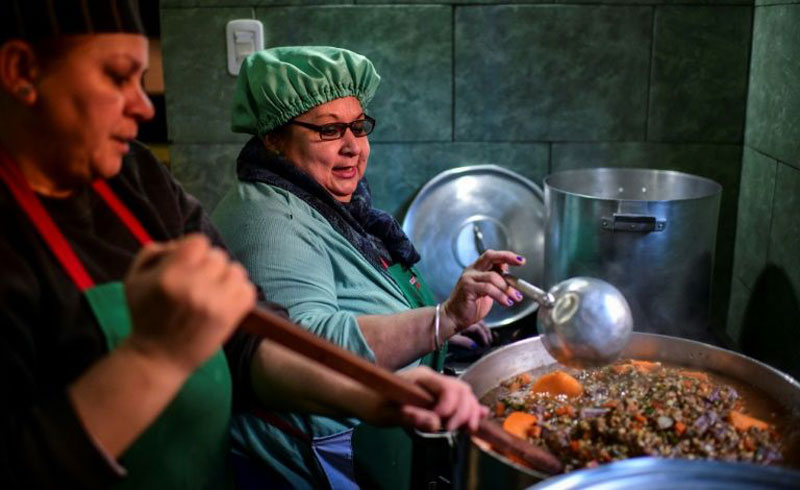 The giant pots simmering in Dagna Aiva’s kitchen explain the long line of people outside her house located in a gritty district of southern Buenos Aires, where Argentina’s economic crisis is hitting locals hard.

Aiva feeds 200 people a day from those steaming pots in Villa 21-24, the urban coalface of Argentina’s economic crisis.

For hard-bitten locals on its tough streets, talk of stock markets and the strength of the safe-haven dollar is a risible middle-class obsession — here the priority is simply putting food on the table.

“I don’t have any dollars, what can they do for me? There are other basic needs I have to find a solution for,” says Aiva.

“We must give priority to other things, to pay the day to day, to eat every day,” the 48-year-old activist adds.

A long, silent line forms in the alley outside as women with toddlers, the elderly and disabled shuffle up to her kitchen door, shopping bags ready to take away food.

Inside, women wearing aprons and hair covers ladle meat and vegetables from the pots into Tupperware containers.

Argentina’s economic tailspin has seen the peso lose half its value, unemployment soar and the economy shrink by 5.8 percent in the first quarter. Argentines have seen their earnings, savings and purchasing power diminished.

“Here, it’s full of people who work a lot, it’s sad to see that they cannot have enough to eat,” said Avia, gazing out at the polluted Riachuelo river, which borders the barrio.

Argentina — South America’s second-largest economy and a land of contradictions with a widening gap between rich and poor — is also one of the continent’s three countries where hunger has increased in 2018, alongside Venezuela and Guatemala.

A average basket of household goods costs 4,200 pesos — 57 percent higher than in July last year, and well above wage increases.

“I don’t have dollars… but I worry because inflation has a lot to do with the dollar,” said retired nurse Palomo Gomez.

Center-right President Mauricio Macri, in power for four years and seeking re-election in October, had promised to reach the goal of “zero poverty” during his term. Instead, poverty has deepened to reach 32 percent of the population, according to official figures.

Likewise, Macri — forced to seek a $57 billion bailout from the IMF last year — has failed to tame inflation, now running at over 50 percent, and his government has recognized that the country’s 10 percent unemployment rate will worsen.

Former health minister Daniel Gollan has highlighted one of the crisis’ most troubling statistics, five million children and adolescents plunged into a “critical food situation.”

Trade unions and social organizations, as well as the Catholic Church and opposition parties, have demanded the government declare a “food emergency.” That would allow more funds to be allocated to manage an increasingly desperate situation.

The government has refused so far. “There are situations of poverty, but that does not mean that there is hunger,” Culture Minister Pablo Avelluto said.

The six women who distribute food from Avia’s kitchen receive a supplementary salary from the state, equivalent to half the minimum wage, 7,500 pesos ($110 currently). It’s hardly enough to get by.

Municipal authorities supply enough meat and vegetables every day to make 160 meals, but the women say they manage to stretch their supplies out to feed 200.

The IMF is expected to disburse the latest tranche of the loan, $5.4 billion, this month. The favorite to win next month’s election, the leftist candidate Alberto Fernandez, has repeatedly assured the IMF that Argentina would meet its debt obligation, but not at the expense of the people.

Fernandez is expected to try to renegotiate the agreement after the election, in a bid to ease debt repayments.

The vote in areas like Villa 21-24 is likely to be overwhelmingly pro-Fernandez, as Argentina’s poor hope for some respite. For them, the priority remains putting the next meal on table.