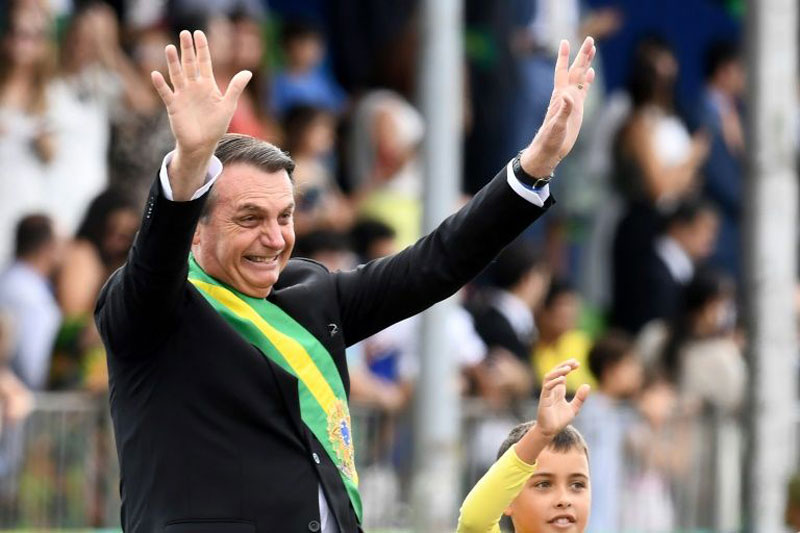 The far-right head of state has made a habit of speaking undiplomatically, wading into disputes with foreign leaders particularly when it comes to defending Brazil’s sovereignty over the Amazon and its human rights record.

His latest target is Chile’s former president Michelle Bachelet, whom he took aim at this week by lauding how “communists like her father” were dealt with by the 1970s Augusto Pinochet regime. Bachelet’s father died in prison in 1974 after being tortured.

Bachelet, now the UN High Commissioner for Human Rights, had set Bolsonaro off by voicing concern over “a narrowing of the democratic space” in Brazil.

In the midst of his spat with Emmanuel Macron over the Amazon fires, Bolsonaro mocked the first lady Brigitte Macron’s looks in a Facebook post deemed “extraordinarily disrespectful” by an exasperated French president.

One of his cabinet members also referred to Macron as “an opportunistic cretin” — that was the education minister — while another, high-profile Economy Minister Paulo Guedes, said Brigitte Macron was “truly ugly.”

So unfiltered and vulgar has the rhetoric become under Bolsonaro that he no longer seems aware of normal diplomatic limits, a concern that political commentators say embarrasses many Brazilians.

When Germany’s Chancellor Angela Merkel suspended subsidies to an Amazon conservation fund in protest at Bolsonaro’s policies, she was told to go and “reforest Germany.”

Bolsonaro also took aim at Oslo, which similarly withdrew funding, by broadcasting videos of “Norway-sponsored whaling” — though the pictures were actually shot in Denmark.

In Latin America, his apology for the Pinochet regime shocked modern-day Chile.

As for major trading partner Argentina, Bolsonaro already locked horns with the likely-future president Alberto Fernandez, opining that his near-certain victory in October’s election demonstrated that Argentina was on the verge of chaos to rival that of Venezuela.

The leftist Fernandez retorted that Bolsonaro was “misogynist, racist and violent.”

“From the diplomatic point of view, his style and the manner in which he expresses himself is a disaster,” said Christian Lohbauer, an expert in international relations at the University of Sao Paulo.

The Brazilian president was due to host Le Drian in Brasilia in July but canceled at the last minute to have his hair cut, angering Macron.

“I’m sorry, it’s not the behavior of a president,” Macron was filmed saying to his Chilean counterpart Sebastian Pinera at the recent G7 summit.

Why cause so much outrage?

“It’s unprecedented but it would be a mistake to say that this government is crazy or irrational, they know what they’re doing,” said Monica Herz, associate professor of international relations at Rio’s PUC University.

Bolsonaro is speaking to his own base in Brazil, where he has “a very extremist right-wing political project,” she says. “He only speaks to the 30 percent of Brazilians who lean very strongly towards the extreme right.”

With the recent diplomatic spats, the former army captain has played the nationalist card to try to remobilize his electoral base and to counter an approval rating that has slipped to 41 percent.

Bolsonaro has an “uncivilized, ill-mannered style” he shares with US President Donald Trump, “but of course Mr Trump has more power than he does,” says Lohbauer.

A faltering Brazilian economy could be faced with potentially catastrophic boycotts if policies aren’t enacted to protect the Amazon, with consequences for meat, leather and soy exports. The EU-Mercosur Free Trade Agreement is also under threat.

“He’s not going to change his behavior. Foreign leaders are going to have to put up with it for the rest of his presidency.”