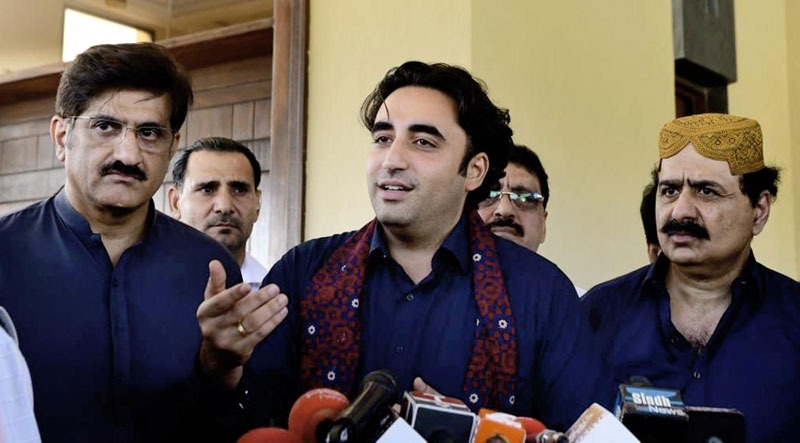 Announces to give only moral and political support to JUI-F

“Whether it was a sit-in by Tahirul Qadri, Imran Khan or by Tehreek-i-Labbaik; we were in opposition when those sit-ins took place but we never joined them,” Bilawal said while talking to reporters here, while promising to provide ‘moral and political support’ to the JUI-F. “The PPP has had a clear and consistent policy when it came to dharna politics,” he said. “This was the initiative of Maulana Fazlur Rehman … he took the initiative … but it has been our party’s consistent policy that we do not participate in sit-ins,” he added.

Bilawal said regardless of whether Fazl marches on Islamabad or tours the whole country, the stance of his party and the JUI-F is the same. “We definitely support the issues that he’s raising and he will have our moral and political support,” he added.

Bilawal announced that he will go around the country as part of his mass contact campaign and raise the same issues as being highlighted by Fazl. “While Maulana Fazlur Rehman will be in Islamabad, I will be going across the country and our narrative will be the same, which is that this puppet, incapable prime minister, who has been imposed upon us through rigging, who has ruined our economy, who has weakened our national security position on every issue including Kashmir … he will have to go home,” he said.

The JUI-F chief had last month announced that his party had planned a ‘decisive’ long march aimed at ousting the present ‘fake government’ in October. He had said that his party was in contact with leaders of opposition parties in order to get them on board.

Meanwhile, talking to reporters along with Chief Minister Syed Murad Ali Shah after offering condolences with PPP MPA Malik Asad Sikandar on the sad demise of his mother in Thana Ahmed Khan, Bilawal said democracy is under attack in the country. To a question, the PPP chief said he is unaware of prime minister’s visit to Karachi. “These people (PM and federal ministers) come to Karachi only for photo sessions,” he said, adding that garbage from one place is being dumped into another in the name of clean Karachi drive. “The selected government is committing mistakes again and again … what this puppet government has done with the economy is intolerable,” he said.

Bilawal said the incumbent government has not only failed in resolving issues of the people in the country but has also failed on the international front, especially Kashmir. “Modi government has pushed the people of Kashmir into the biggest jail on earth and made their lives miserable. Pakistan’s prime minister could not make any serious efforts for Kashmiris due to his incompetence,” he said.

Meanwhile, Special Assistant to Prime Minister on Information and Broadcasting Dr Firdous Ashiq Awan has said that Bilawal Bhutto Zardari wants Maulana Fazlur Rehman and the seminary students to bear the brunt of sit in and he (Bilawal) occupy the throne after coming in a bulletproof vehicle. In a tweet, she said the meaning of Bilawal’s most recent statement is to stay awake and don’t rely on anyone. She said from the very first day the opposition is playing politics with each other, adding that they are facing dangers from within their own ranks.

Dr Firdous taunted the JUI-F leader with a series of tweets claiming that Maulana’s efforts against the current government will never see fruition or bear results. She said partnership of the opposition parties has proven to be an enormous failure due to their internal fighting. In conclusion, she ‘advised’ Fazl to save his accumulated wealth, claiming that his partners want to turn him into a scapegoat and are baiting him into.