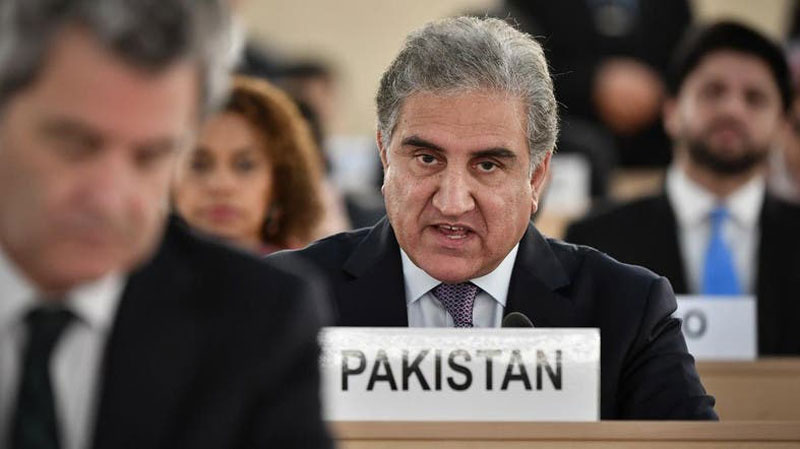 Speaking to journalists on the sidelines of the UN Human Rights Council in Geneva, Qureshi said he believes both Pakistan and India ‘understand the consequences of a conflict’. But with tensions soaring since New Delhi revoked Kashmir’s autonomy last month, he warned, “You cannot rule out an accidental war. If the situation persists … then anything is possible.”

Qureshi, who on Tuesday appealed to the Human Rights Council to launch an international investigation into the situation in Kashmir, told reporters he had spoken with Bachelet and had invited her to visit both Held Kashmir and Azad Kashmir. “She should visit both places and report as objectively as she can so that the world knows what the true … situation is,” he said, adding that Bachelet had said she ‘was keen to visit.

Qureshi, meanwhile, ruled out the possibility of bilateral talks to resolve the tensions. “In this environment and with the mindset that we see in New Delhi today, I do not see any room for a bilateral engagement,” he said, adding that a multilateral forum or a third-party mediator will likely be needed. “If the US plays a role, that can be important because they have a considerable influence in the region,” he said.

Earlier, the foreign minister told the United Nations human rights forum that India’s military presence in the occupied valley has raised the specter of genocide. Qureshi evoked past and current atrocities in Europe, Africa and Asia when he addressed the council. “The forlorn, traumatized towns, mountains, plains and valleys of Indian-occupied Jammu and Kashmir reverberate today, with the grim reminders of Rwanda, Srebrenica, the Rohingya, and the pogrom of Gujarat,” he said. “I shudder to mention the word genocide here, but I must… The Kashmiri people in the occupied territory – as a national, ethnic, racial and religious group of people – face grave threats to their lives, way of living and livelihoods from a murderous, misogynistic and xenophobic regime,” he added.

Meanwhile, Pakistan has expressed gratitude to over 50 countries for becoming part of its joint statement in support of the people of Kashmir, reinforcing serious concerns of the international community about the unprecedented restrictions, continued curfew and curtailment of fundamental rights of Kashmiris. On behalf of over 50 states, Pakistan had presented a joint statement to the UN Human Rights Council on Tuesday regarding the worsening human rights and humanitarian situation in Indian-held Kashmir. “Pakistan appreciates the joint call by these countries for removal of restrictions, respect and protection of the Kashmiri people, implementation of the recommendations of UN’s Kashmir reports and peaceful resolution of the Jammu and Kashmir dispute through the implementation of the UN Security Council resolutions,” a Foreign Office statement said.

The joint statement mentioned the deteriorating situation in the occupied valley, especially following decisions taken on August 5, 2019, and called for urgent attention by the Human Rights Council and human rights mechanisms. It drew attention towards the concern expressed by the High Commissioner for Human Rights Michelle Bachelet regarding the impact of recent actions on the human rights of Kashmiris and also the statements of UN Secretary-General Antonio Guterres, the Office of the High Commissioner for Human Rights (OHCHR), and UN Special Procedures expressing serious concerns over the continuous curfew.

The joint call urged the international community to take notice of immediate halt to the excessive use of force, especially the use of pellet guns and press for regular reporting by the UN high commissioner for human rights on Jammu and Kashmir. It also demanded a peaceful resolution of the Jammu and Kashmir dispute through the implementation of the UNSC resolutions.