Relish the richest pickings this chic principality has to offer 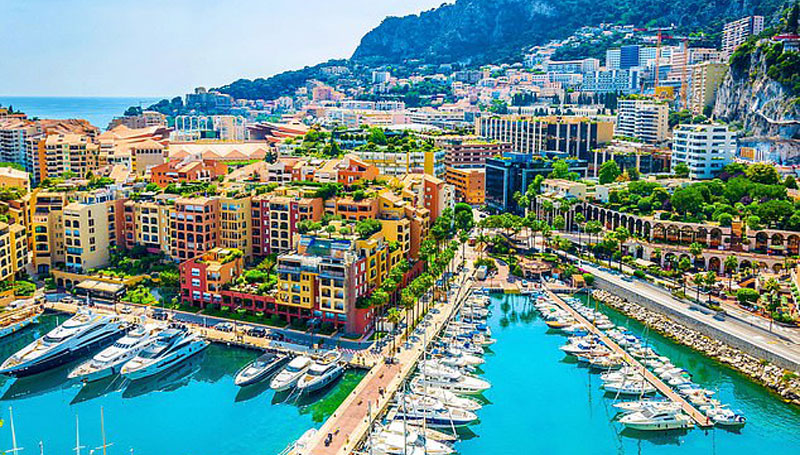 Monaco occupies a special place on the gilded Cote d’Azur. A break here will never be cheap, but it will be memorable.

A short hop from Nice, and with super-yachts moored in the harbour, Monaco is high-rise and low-tax – a third of the population are millionaires. The principality has been ruled over by the Grimaldi family since the 13th Century.

Get your bearings at the top people-watching spot – an outside table at the Cafe de Paris (montecarlosbm.com). It’s in the heart of Monte Carlo, the most famous part of Monaco. The name was invented in 1862 when Charles III of Monaco asked French architect Francois Blanc to build a casino to woo the rich from Paris, where gambling was banned.

Toy with a coffee (£7) while scoping out the supercars. The fabulously glamorous Grand Prix is held here each year at the end of May, but on any day you’ll be able to see Porsches, Lamborghinis and Ferraris zooming past the palm trees and fountains.

Blanc’s casino is a domed Belle Epoque paeon to pleasure, mixing a theatre with gaming tables. In 1864, his equally ornate Hotel de Paris (montecarlosbm.com) opened, and kings, princes and film stars followed, including Cary Grant and Frank Sinatra. The hotel has just been renovated with new suites.

Measuring less than a square mile, Monaco is easily explored on foot. Towering over everything is the Prince’s Palace (palais.mc). The castle – home to Prince Albert and Princess Charlene, but with some parts open to the public – is a melange of marble and frescoes. The entrance fee of £12 also allows you to view the royal car collection.

Wander downhill to the marina at Fontvieille Harbour, where you’ll find Les Perles de Monte-Carlo (perlesdemontecarlo.com) perched on a rocky esplanade. Eating here at a table on the terrace is a quintessential Monaco experience. Expect to pay about £27 for a plate of local oysters.

Old Monaco is the most charming part of the principality – a series of colourful 19th Century buildings housing shops and galleries. Monaco can feel dominated by international design labels but things are more individual here. Pierre (pierre.mc) on Rue Grimaldi is worth a visit. The owner has a well-chosen collection of homewares and fashion, including vintage photos.

Stop off at Les Grands Chais de Monaco (grandschais.com) on Rue Baron de Sainte-Suzanne, the oldest wine shop in the state, with a subterranean bar that’s sometimes open for events.

Featuring in the movies GoldenEye and The Red Shoes, the Monte Carlo Casino (montecarlosbm.com/en/casino-monaco, £15 entrance) is one of the most famous in the world, but head inside today and it lacks a bit of 007 glamour.

It was here that I had the only poor meal during my trip. My advice would be to cut your losses and head to the Bar Americain instead. Part of the Hotel de Paris, it is lined with photographs of past customers, and nowhere captures Monaco’s blend of pleasure and perfectionism better. A cocktail costs up to £27, but the venue itself has a clubby atmosphere and a great deal of savoir faire.

In the Mediterranean, everything centres around a market, even in Monaco. Le Marche de la Condamine (mairie.mc) is open every day and stallholders sell everything from fruit and fresh pasta to flowers and deli items, both inside a market hall and outside on the market’s piazza, the Place d’Armes.

You’ll also be able to grab a coffee from the Italian-owned Le Comptoir or from one of the market cafes for a couple of euros and feast on pastries.

L’Hirondelle (montecarlosbm.com) serves up healthy, delicious food on a terrace below the casino Expect to pay about £45 a head. Afterwards, it’s all too easy to slip into Monegasque ways and head to the Marines des Thermes spa next door for a facial.

It’s time to hit Larvotto, Monaco’s largest stretch of sand. It’s a ten-minute walk but on the way you’ll pass the Japanese gardens (free), with ornamental ponds and koi carp – a touch of serenity in a high-octane place.

If you fancy soaking up the sun, you can rent beds from £20 a day at the La Note Bleue (lanotebleue.mc) but there’s also a public beach.

Housed in fin-de-siecle splendour at the Hotel de Paris, the Louis XV restaurant (ducasse-paris.com/en/addresses/louis-xv-alain-ducasse-hotel-paris) has three Michelin stars and is Monaco’s most prestigious restaurant.

Under the supervision of chef Alain Ducasse, the menu brings a lightness of touch to French classics. Start with wafer-thin bread studded with vegetables and finish with petits fours and teas. The tasting menu costs from £325.