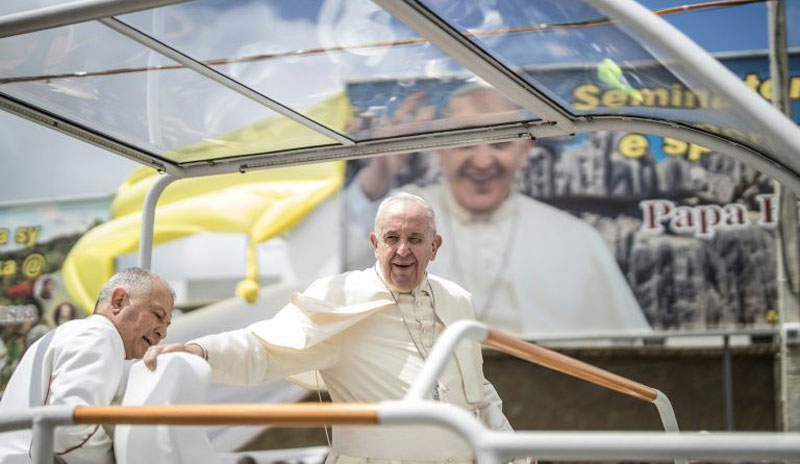 Pope Francis arrives in Mauritius on Monday on the final stop of a three-nation Africa tour where he is expected to celebrate the island nation’s tolerance and diversity.

The Argentine pontiff will celebrate mass, visit the shrine of a French priest and meet political leaders in a brief stop in the small but religiously mixed Indian Ocean country.

Giant screens have been put up in the capital, Port Louis, to allow devotees to watch the papal mass, and billboards adorned with Francis’ image have sprung up across the coastal city.

Mauritius, a tiny island of around 1.2 million lying 1,800 kilometres (1,100 miles) west of the African mainland, is predominantly Hindu but has sizeable Christian and Muslim minorities.

About 30 percent of Mauritius is Christian, with most being Catholic.

“It will not be a visit of Pope Francis to the Catholics but to the Mauritian people in all its religious diversity,” said Cardinal Maurice Piat, Bishop of Port Louis, ahead of the papal visit.

A stable democracy and a middle-income economy, Mauritius contrasts with the pope’s other tour stops to Madagascar and Mozambique, two of the world’s poorest nations.

Mauritian Prime Minister Pravind Kumar Jugnauth said the Pope would encounter a “true model of pluralism” during his visit.

“Our cultural diversity has never prevented us from creating an environment conducive to dialogue, understanding and peace,” he said.

The Pope will preside over mass at the Mary Queen of Peace Monument, the same hillside location where John Paul II celebrated the eucharist during the last papal visit to Mauritius in 1989.

Francis’ visit coincides with the 155th anniversary of the death of Father Jacques Desire Laval, a French priest who died in Mauritius in 1864 and was beatified in 1979.

The Pope will visit the mausoleum of Laval, known as the “Apostle of Mauritius” for his missionary work.

Every year about 100,000 pilgrims visit the tomb of Laval, northeast of Port Louis, on the night of September 8-9, to commemorate his death.