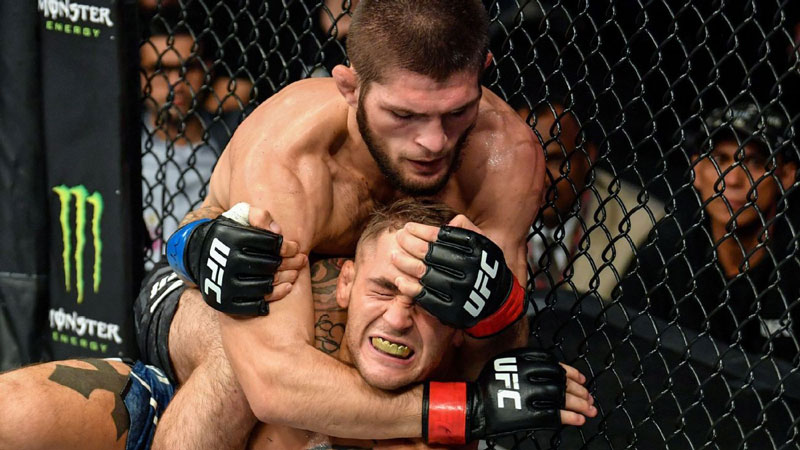 ABU DHABI: Khabib Nurmagomedov unified the Ultimate Fighting Championship lightweight title with a third-round submission win over interim champion Dustin Poirier in Abu Dhabi on Saturday. The Dagestan native escaped a guillotine choke to take Poirier’s back before shifting his position and sinking into a rear naked choke. Poirier quickly tapped, sending the crowd favorite to a career 28-0 at UFC 242.

Nurmagomedov dominated the fight and was rattled just once when Poirier clipped him with a right hand in the second, forcing him to scramble before recovering and soon taking the American back to the mat. The titles were unified with UFC having two lightweight champions. Poirier became interim champion in April due to holder Nurmagomedov being suspended.

The victory marked Nurmagomedov’s return to the octagon since serving the suspension for his involvement in an October arena brawl following a fight with Conor McGregor. Nurmagomedov referenced his feud with the Irishman, who he has accused of insulting his family and religion. “MMA is not about trash talking, this is what we show with Dustin Poirier and his great team,” he said. Nurmagomedov was overwhelmingly the crowd favorite, with fans roaring into chants of “Khabib”.

Among those in attendance was Chechen leader Ramzan Kadyrov who sat ringside with UAE minister and Abu Dhabi ruling family member Sheikh Nahyan bin Mubarak al-Nahyan. Poirier, who became interim lightweight champion when he beat Max Holloway at UFC 236, apologized for the defeat.

“Now I’ve got to wake up and look myself in the mirror every morning with this result,” he told the crowd. Nurmagomedov and Poirier both said ahead of the fight they expected Tony Ferguson would be next in line for a shot at the lightweight title. Following the match, Nurmagomedov said he would take a few days to relax before he made a decision on his next move. Saturday saw women compete on a UFC card for the first time at one of their events in the Middle East. Scotland’s Joanne Calderwood defeated American Andrea Lee on a split points decision. Canadian Sarah Moras scored a third round technical knockout over Georgian Liana Jojua in the other women’s bout.