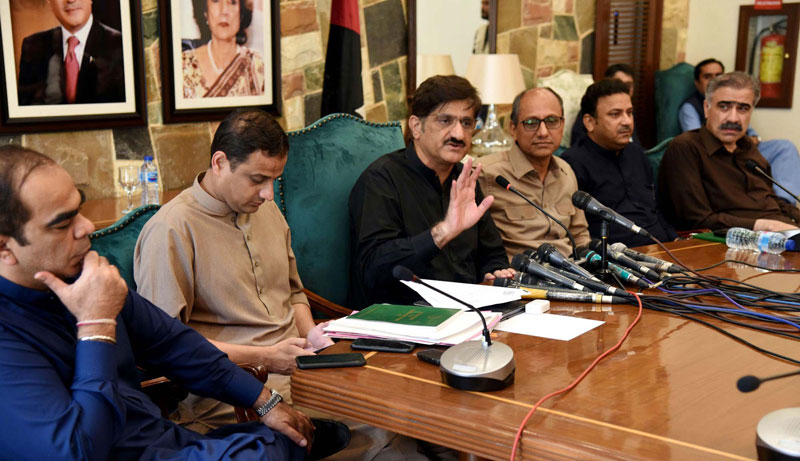 Sindh Chief Minister (CM) Syed Murad Ali Shah has lamented the elected government of Punjab for refusing to honour the production orders of Member of Provincial Assembly (MPA) Faryal Talpur, while those orders were honoured by National Accountability Bureau (NAB) when she was in their custody. He said this while addressing a press conference at the CM House on Sunday.

When Faryal Talpur was in NAB custody she was brought in the assembly to attend the session. But ever since she has been sent to jail, under the administration of the elected government of Punjab, every production order issued by the Sindh Assembly speaker for her production has been dishonored, Shah said.

He was in jail but when the speaker was issuing his production order he was being produced in the National Assembly (NA) the CM said quoting the example of Member of National Assembly (MNA) Khawaja Saad Rafique. “This is very serious and is bound to further aggravate a sense of deprivation already prevailing among people of Sindh,” the CM said.

The Provincial Assembly (PA) had passed a resolution urging the CM to use his good offices for the production of Talpur in the PA, Shah said. “Being the chief minister, I was bound to act upon the will of the house, therefore I talked to Punjab chief secretary and the Punjab governor to honour the production orders of the Sindh Assembly speaker but all my requests fell flat on deaf ears,” he said. I tried to contact the Punjab CM with the request to honor the production order of Talpur issued by the Sindh Assembly speaker but he was too busy to receive any calls, the CM said.

Being elected an MPA, Faryal Talpur was entitled to represent her constituents in the assembly house. “The assembly rules, of the provincial and the national, empower the speaker to issue production orders of the detained/arrested member and the government was bound to honour them,” Murad said. However the elected government of Punjab was not honouring the production orders of the speaker which was surprising for him, he said.

It doesn’t matter that the `rulers’ were not listening to him, the CM answered to a question. ” But I am addressing this press conference just to inform the people of Pakistan that how the representatives they elect are denied their representation in the assembly,” he said and added this is what he wanted to tell the people of Punjab as well.

The formation of a forward block in Sindh assembly was a bubble of hot air, Shah said replying to another question. “Every day new rumours are being spread just to create uncertainty in the province but within a few days these rumours die down themselves,” he said and added that the MPA’s and other elected representatives of Pakistan People’s Party (PPP) and party workers were united under the leadership of PPP Chairman Bilawal Bhutto and President Asif Zardari.

The CM asked that when had conspiracies not been hatched against the PPP. Conspiracies have been going on since the inception of the party but all of them have back fired with the power of people. “In 2018 an election conspiracy was hatched against PPP but it bagged more seats than before,” he said.

PPP elected people and other representatives were not afraid of accountability, but accountability has been translated into victimization here, Shah said. “This is against democracy and democratic institutions,” he said. Talpur used to attend assembly sessions and standing committee meetings when she was in NAB custody and was sent back to courts when her hearings were fixed, the CM added.

“When we are asking you not to try us and our leaders, what we are really asking from you is to be fair with us,” he said. “When the application of laws for opposition members would be different from the members of treasury benches or ministers, people would raise their fingers at you,” the CM added.

The NAB court has clearly written in its order that she should be produced in the assembly when her production orders were issued and returned to the court when her case was fixed, Talpur’s lawyer Advocate Zia Lanjar said. However these orders have not been obeyed, he added.

The PA session has been summoned on September 13, and the speaker has issued the production orders of Talpur, the CM said. He demanded the Punjab government to allow her production in the Sindh Assembly.