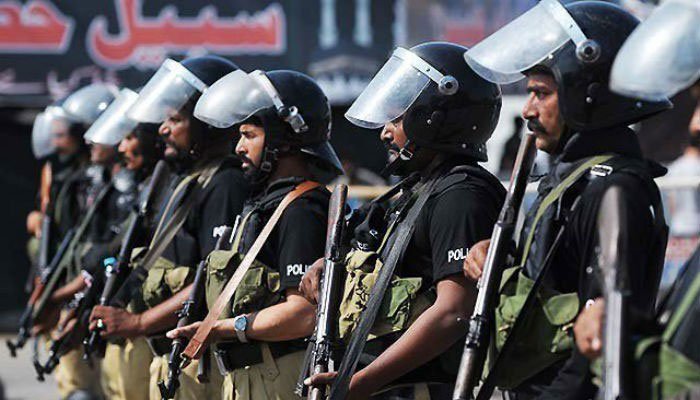 KARACHI: The provincial government has announced a ban on pillion riding across Sindh, including Karachi, on the 8th, 9th and 10th Muharram.

There will be a ban on pillion riding from the night of the 8th of Muharram until Ashura in order to maintain law and order and avoid any untoward incident.

The Sindh government has also requested the ministry to block the mobile phone services along the procession routes on Muharram 9 and 10.

According to the private source, as many as 69,545 police personnel will perform security duties across the province including 17,558 in Karachi, 16,816 in Hyderabad, 2,237 in Mirpurkhas, 9,280 in Shaheed Benazirabad, 8,258 in Sukkar and 15,404 in Larkana, reads a contingency plan prepared by AIG Operations Sindh for Muharram.

In Karachi, MA Jinnah Road has been sealed with containers and other barriers and would remain unavailable for routine traffic on 9th and 10th Muharram. Roads joining Saddar Regal Chowk, corridor-3 to Saddar Dawa Khana have also been sealed for traffic.

ecurity has been beefed-up for 8, 9 and 10 Muharram processions in the metropolis. The police have sealed shops and blocked roads with containers.

The Sindh government has declared 9th and 10th September (Monday and Tuesday) as public holidays on the occasion of Ashura.

Senior Superintendent of Police (SSP) Hyderabad district Adeel Hussain Chandio has said some 218 mourning processions and majalis have been declared as sensitive in Hyderabad.

He added, over 4,000 policemen would be deployed for security on the Muharram 10 in addition to the Rangers. A unit of Pakistan Army would be in a standby position.

He said although there was no specific threat of a terrorist attack in Hyderabad, the security officials were ensuring stringent security to prevent any incident.

Security beefed up in Peshawar ahead of Ashura

At least 12,000 policemen have been deployed in Peshawar capital under a comprehensive security plan.

The entry points to the district particularly the urban areas have been further strengthened and the closed-circuited television cameras (CCTV) installed in a number of places to monitor any suspicious activity.

Apart from the regular police, policewomen and officials in civvies have been deployed in different parts of Peshawar to keep a check on suspicious movement.

Police have set up 64 entry points in the city where 268 policemen have been deployed while barricades were put up at 565 points in the provincial capital to check suspicious people.

An aerial vigilant will also be conducted on the 9th and 10 Muharram in the provincial capital Peshawar, Kohat, Hangu and Dera Ismail Khan.

For ensuring the provision of timely healthcare facilities during Muharram emergency has been declared in Lady Reading Hospital (LRH) by creating six operation theatres, putting 16 ambulances for dealing with any emergency besides deputed 422 persons on high alert.

Chief Traffic Officer (CTO) LiaqatAli Malik on Saturday said that foolproof traffic arrangements had been finalised for the main procession route of Muharram 9 and 10.

According to the plan, two SPs, Six DSPs, 72inspectors along with women traffic wardens and 1,351 wardens would perform their duties along the route of the main procession.

All office staff would also be deputed on roads to facilitate the general public and no vehicle would be allowed to enter from any arteries on the procession route.

Traffic would be diverted to alternative routes from different points.