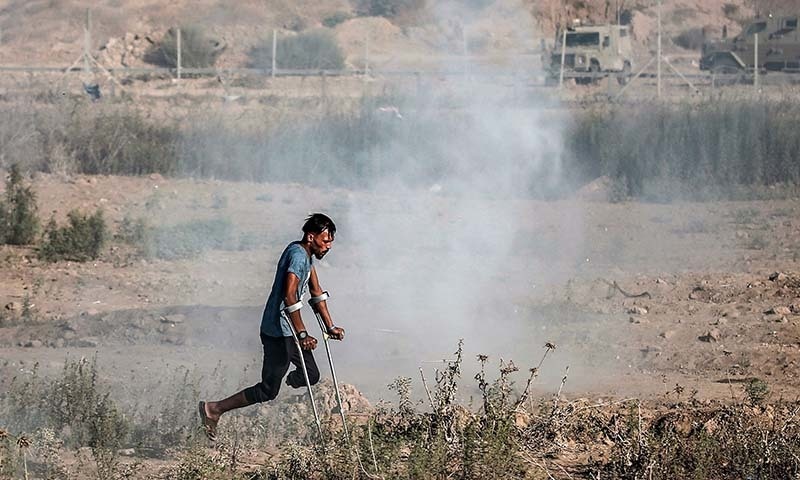 The exchange came hours after two Palestinian teenagers were killed by Israeli fire during clashes on the Gaza border.

Late on Friday, “five projectiles were launched from the Gaza Strip towards Israel,” the army said.

In response, an “aircraft and tank struck a number of Hamas military targets in the northern Gaza Strip, including a post and military positions,” the army said in a statement.

A Hamas security source said there were no casualties resulting from the Israeli strikes.

Later on Saturday, a drone launched from southern Gaza crossed into Israeli airspace, the army said in a separate statement.

It “dropped what seems to be an explosive device” near the security fence, damaging a military vehicle before returning to Gaza.

In response, an Israeli “aircraft targeted the squad which launched the drone”, the army said.

There were no reports of casualties in Gaza, but the unrest on the frontier continued throughout the day as four Palestinians infiltrated Israel and were apprehended by the army.

Three 13-year-olds crossed the border from the southern Gaza Strip, and a search revealed a knife, the army said in a statement.

Later, another infiltrator — this time from northern Gaza — was apprehended, and two knives were found on him, the army said.

Addressing the latest escalation, Israeli Prime Minister Benjamin Netanyahu said he had been updated on the events and threw the blame at Gaza’s Islamist rulers.

“Hamas is responsible for any act of aggression emanating from Gaza,” he said in a statement.

“Any attempt to harm our soldiers or civilians has been and will be met with a harsh response.” During border clashes on Friday, two Palestinians aged 14 and 17 were shot dead by Israeli forces, the Gaza health ministry said, with another 46 Palestinians wounded.

Palestinians have been holding regular mass protests along the fortified border since March 2018.

The protesters have called on Israel to end its crippling siege of the coastal enclave and demanded the right to return to lands their families fled during the war that accompanied the creation of Israel in 1948.

Israel says any such return would mean its end as a Jewish state and accuses Gaza’s Islamist rulers Hamas of using the protests as cover for attacks.

At least 308 Palestinians have been killed by Israeli fire in Gaza since the protests began, the majority during the demonstrations. The protests have calmed in recent months.