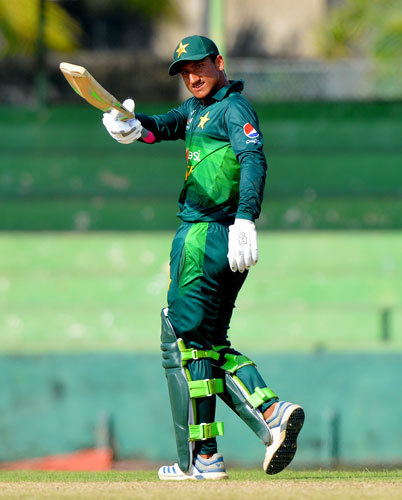 Rohail Nazir led from the front but Pakistan lost their ACC Under-19 Asia Cup 2019 Group A match against India by 60 runs at the Tyronne Fernando Stadium, Moratuwa on Saturday. Before the start of the match the two teams observed a minute’s silence in the memory of legendary Test leg-spinner Abdul Qadir who passed away yesterday in Lahore. Set a 306-run victory target, Pakistan were dismissed in the 47th over for 245 runs to lose their second successive match in the tournament following the 85-run loss to Afghanistan on Thursday. Batting at number three, the right-handed Rohail, scored 117 runs off 108 balls with the help of 12 fours and three sixes to keep Pakistan in the run despite the fall of wickets from the other end. Rohail added 120 runs for the fourth wicket with Mohammad Haris in the most productive partnership of the innings. Haris scored 43 off 53 balls, his innings included two fours and one six. Rohail fell in the 41st over with the score at 220. Pakistan were eventually dismissed in 46.4 overs, for India, Atharva Ankolekar took three wickets for 53 runs in his 10 overs while Vidyadhar Patel took two for 28 in nine overs.

Earlier, centuries by opener Arjun Azad (121 off 111 balls, 11 fours and four sixes) and number three batsman Tilak Varma (110 off 119 balls, 10 fours and one six) propelled India to their eventual 305 for nine total. The two added 183 runs for the second wicket after the other opener Suved Parkar was dismissed for three runs by Abbas Afridi after a 38-run opening stand. Pakistan bowlers led by Naseem Shah (3 for 52) brought the team back in the hunt as India lost eight wickets for 73 runs to slide to 294 for nine from 221 for 1 in the 38th over. Afridi took three wickets for 72 runs.