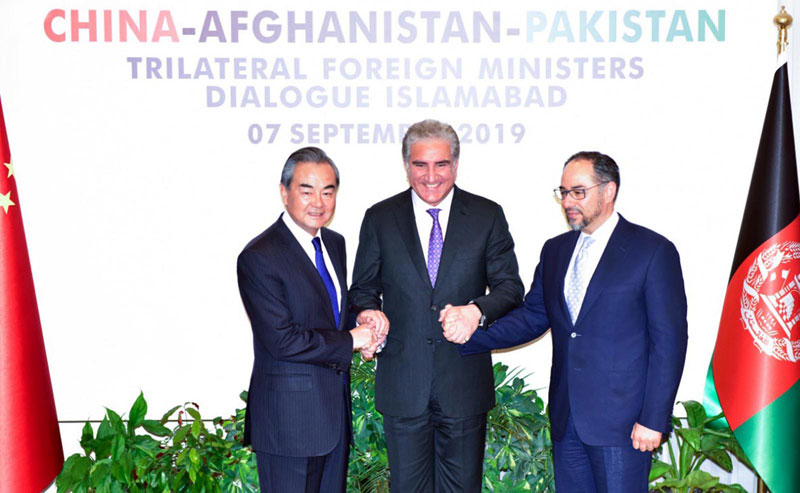 A joint statement issued here after the 3rd Session of China-Afghanistan-Pakistan Foreign Ministers’ Dialogue, the three sides particularly underlined the need for an inclusive Afghan-led and Afghan-owned peace process leading to a comprehensive agreement for durable peace and stability in Afghanistan. “Based on respect for the will of the Afghan people, while appreciating the efforts made by the Government of Afghanistan, China and Pakistan expressed their continued support for Afghanistan’s peace and reconciliation process as well as for the efforts towards reconstruction and economic development in the country,” the joint statement read.

The three sides condemned the recent terrorist attacks in Kabul, Konduz, Baghlan and Farah, which have taken many innocent civilian lives including women and children.

China, Afghanistan and Pakistan, while closely following recent developments in the regional situation, reiterated their support for a politically negotiated settlement of the conflict in Afghanistan. In this regard, they took note of the talks between US and the Taliban. They expressed hope that intra-Afghan negotiations including direct negotiations between the Islamic Republic of Afghanistan and the Taliban begin soon and lead to full cessation of violence bringing lasting peace for the people of Afghanistan.

The three sides reaffirmed their commitment to further strengthening their relations, exploring new ways of deepening cooperation, including advancing connectivity under the Belt and Road Initiative (BRI), Regional Economic Cooperation Conference on Afghanistan (RECCA) and other regional economic initiatives.

The three sides agreed to explore ‘China-Afghanistan-Pakistan Plus’ cooperation, as well as working towards promoting trade and connectivity projects between Afghanistan and Pakistan, such as Kabul-Peshawar Motorway.

The three sides welcomed the progress made on implementation of projects agreed under the China-Afghanistan-Pakistan Practical Cooperation Dialogue (CAPPCD). They agreed to continue cooperation in the fields of economic development, capacity building, improving livelihood and people-to-people exchanges.

China, Afghanistan and Pakistan reiterated their strong resolve to fight terrorism in all its forms and manifestations and without any distinction. They reaffirmed commitment of not letting any terrorist organisation, element or individual use their soils against any country. They also decided to work towards effectively implementing the trilateral MoU on cooperation in counter-terrorism, signed at the second round of Trilateral Foreign Ministers’ Dialogue held in Kabul, and agreed on a list of initial projects of enhancing counter-terrorism cooperation in this regard. They recognised the need to continue their joint fight against ETIM and its supporters and facilitators. The three sides committed to promote measures to counter terrorist’s logistical capabilities including terror-financing, recruitment and training.

Later addressing a joint press conference along with his Chinese and Afghan counterparts, Foreign Minister Shah Mahmood Qureshi said they held a very fruitful meeting in which they discussed various areas of cooperation including the regional connectivity. This trilateral platform proved very helpful for future engagements, he said. The discussions will be helpful for thrashing out future mechanism of close cooperation and enhanced engagements among the three countries, he added.

The minister while referring to the recent meetings of Prime Minister Imran Khan with Afghan President Ashraf Ghani said considerable improvement in Pak-Afghan ties has been achieved. He said they have agreed upon to make this useful mechanism of close cooperation further beneficial through future interactions.

Qureshi termed China ‘a good neighbour and trusted strategic partner’ and said ties between Pakistan and China have been growing considerably. The regional connectivity initiated by China will benefit not only Pakistan but the whole region.

Reiterating Pakistan’s full support to the peace process in Afghanistan, he further said US-Taliban framework agreement can ensure sustainable peace in Afghanistan and the region. He said the international community has recognised and acknowledged Pakistan’s efforts against terrorism and facilitation for the Afghan peace process.

State Councilor and Foreign Minister of China Wang Yi Foreign said Afghan peace process offers a major opportunity to all segments of Afghan society to seize upon it and make the dialogue process a success. He noted that solidarity and durable peace in Afghanistan is key to peace and development of the whole region.

The Chinese foreign minister cautioned that the peace process is passing through a critical stage and the foreign troops withdrawal should be made in orderly manner, paving way for further stability. He stressed that this Afghan-owned and Afghan-led peace process should be acceptable to all Afghans. He said efforts should be made to ensure that Afghanistan does not again become a sanctuary of terrorism.

Yi appreciated Pakistan’s efforts in the Afghan peace process and said the leadership of Pakistan and Afghanistan has shown political courage. He highlighted the areas in which the three countries can further enhance their cooperation. He said being an international partner for development, China is ready to undertake major connectivity projects connecting Pakistan with Afghanistan.

Afghan Foreign Minister Salahuddin Rabbani said China and Pakistan have shown strong support to Afghan people in determining their own future. He called upon Taliban to express their genuine desire for peace by halting recent waves of attacks on Afghan cities. He further stressed upon building of close cooperation among the three countries with his government’s focus on transport and energy sectors.