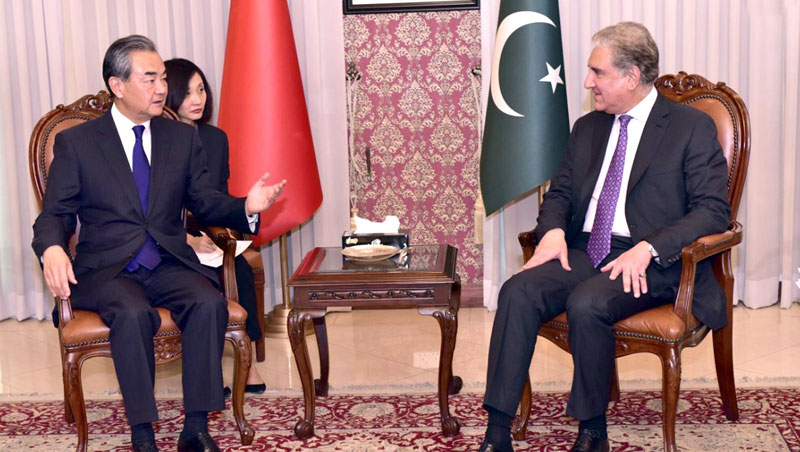 Pakistan and China on Saturday resolved to deepen strategic consultation and coordination at all levels so as to jointly promote regional peace, stability and prosperity, according to a statement issued by the Foreign Office after delegation-level talks between the two countries held in Islamabad.

The two sides noted with satisfaction the bilateral cooperation at multilateral forums and reaffirmed their commitment to the purposes and principles of the UN Charter and support for multilateralism, free trade and win-win cooperation.

The two delegations had an in-depth exchange of views on the entire spectrum of bilateral relations and regional matters, particularly the current situation in Indian-held Kashmir. The two sides underscored commonality of views on the ongoing Afghan peace process.

Foreign Minister Qureshi briefed the Chinese side on the evolving situation in Kashmir following India’s unilateral and illegal actions of August 5. He stressed that the ongoing curfew, the continued lockdown, communications blockade and the massive human rights violations have created a dire humanitarian situation in the valley which needs to be addressed urgently. He underscored that the curfew and other restrictions need to be immediately lifted. He informed the Chinese side of the intensification of ceasefire violations across the Line of Control (LoC) and emphasised that India can attempt a false flag operation in order to divert attention from its crimes in Kashmir.

The foreign minister said Pakistan is grateful for China’s support in the aftermath of India’s illegal and unilateral actions. He stressed that Pakistan and China should continue their close coordination and consultation to ensure that peace and stability in the region is maintained.

Foreign Minister Wang Yi reaffirmed China’s support on Kashmir issue and reiterated opposition to any unilateral action as well as the measures that can further complicate the situation.

Foreign Minister Qureshi emphasised that friendship with China is the cornerstone of Pakistan’s foreign policy. He highlighted that all-weather strategic cooperative partnership between the two countries is deeply rooted in mutual trust and respect and is an anchor of peace and stability in the region and beyond. Pakistan will continue to support China on all issues of its core interest, including Taiwan, Tibet, Xinjiang and Hong Kong, he said, and maintained that CPEC has added a new dimension to the bilateral ties besides contributing immensely to the revitalisation of Pakistan’s economy. He reiterated Pakistan’s commitment to the timely completion of CPEC projects, especially those in Gwadar.

Foreign Minister Wang Yi said Pakistan-China relationship is based on mutual respect, trust and strong bonds of friendship. He appreciated Pakistan’s efforts to achieve goals of national development and extended China’s utmost support in this regard. He emphasised that CPEC is a demonstration project of high-quality BRI projects and is being implemented jointly by Pakistan and China. Both countries have complete consensus on the future direction of CPEC to advance high-quality development in Pakistan, he said, and underscored that Pakistan’s economic and financial situation is improving and the central banks of both the countries must deepen their cooperation to reap dividends at a larger level.