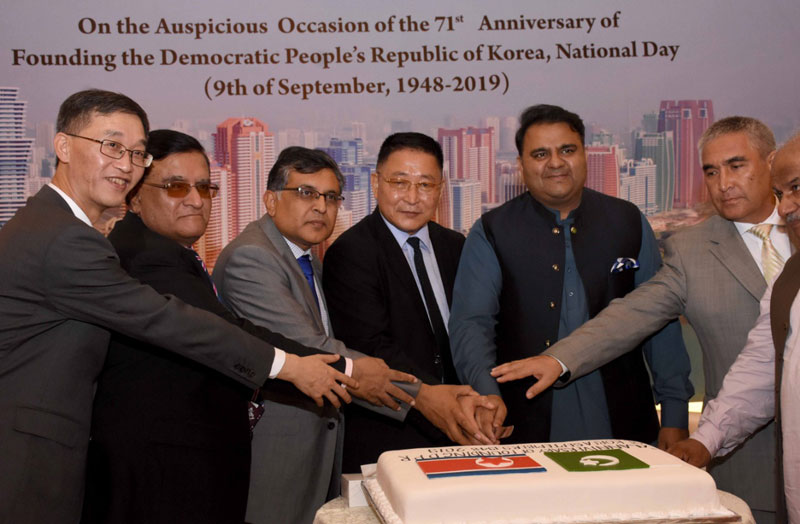 Democratic People’s Republic of Korea remains in the headlines due to its proactive foreign policy. It is known as a trend setter in nuclear diplomacy with its aggressive, bold and candid nuclear posture. The Democratic People’s Republic of Korea, as the Northern part of the Korean Peninsula, as officially known, was proclaimed on September 9, 1948. On the auspicious occasion of the 71st anniversary of the founding the Democratic People’s Republic of Korea the ambassador Mr & Mrs .Kim Thae Sop hosted a grand reception at a local hotel in Islamabad. Fawad Ahmed Chaudhry, Federal Minister for Science and Technology, graced the occasion as chief guest , Dean of the Diplomatic Corps and Ambassador of Turkmenistan Atadjan Movlamov & Zafar Bukhatwari former President ICCI also attend the occasion. The event had good representation of people from all walks of life including diplomats, various ambassadors, politicians, businessman and civilians.

National anthems of both countries were played and a cake was also cut.

Fawad Ahmed Chaudhry, Federal Minister for Science and Technology congratulated the Korean government and said that Pakistan and DPRK have cordial relations whose deep-rooted friendship is growing with time. He talking to Pakistan Observer on the occasion. He further elaborated that both have helped and supported each other in the hour of need. Pakistan will continue its cooperation with North Korea over the time he added. Fawad Chaudhry also paid tribute to Kim Jong IL and conveyed good wishes of the Pakistani Parliament to the DPRK people.

The ambassador Kim Thae sop made a speech in which he admired the efforts of the great Leader President Kim IL sung who founded the democratic People’s Republic of Korea on the 9thSep 1948. In the past 71 years DPR Korea he said has robustly advanced along one road of Socialism. Apprising the efforts of President Kim Il Sung and Chairman Kim Jong II he said that they had accomplished immortal endeavors in state building, developing the DPR Korea into a Socialist country , independent Self Sufficient and self-reliant in National defense.

Focusing on the present situation, he said the supreme leader Kim Jung Un is working to create a powerful socialist country. He is determined to ensure that Korean people enjoy the highest quality of life. He further added that Korean people support and trust him because of his politics of prioritizing, respecting and loving people.

He said the world has witnessed dramatic changes in the Korean peninsula this year and its surroundings. He mentioned two historic summit between top leaders of north and south Korea for a new history of peace, prosperity and reunification in the Korean Peninsula, and the first ever DPRK-us summit meeting in Singapore in June with aims to puts an end to the hostility between the two countries and open up a new future for the sake of global peace and security. Another north-south summit meeting is scheduled for September in Pyongyang which will discuss the acceleration of the development of the north-south relations. He appreciated the achievements of the government of Pakistan and its people for the development and prosperity of the country.

On bilateral relations he said that DPRKorea’s consistent policy is to further the relations of friendship with Pakistan and make more efforts for the expansion in many fields. He wished good health to Imran Khan , Prime Minister of Pakistan from the respected Supreme Leader Kim Jong Un. He also thanked the Chief Guest and other guests for their participation.