Away from the glitzy crowd, the island’s rugged east coast oozes charm 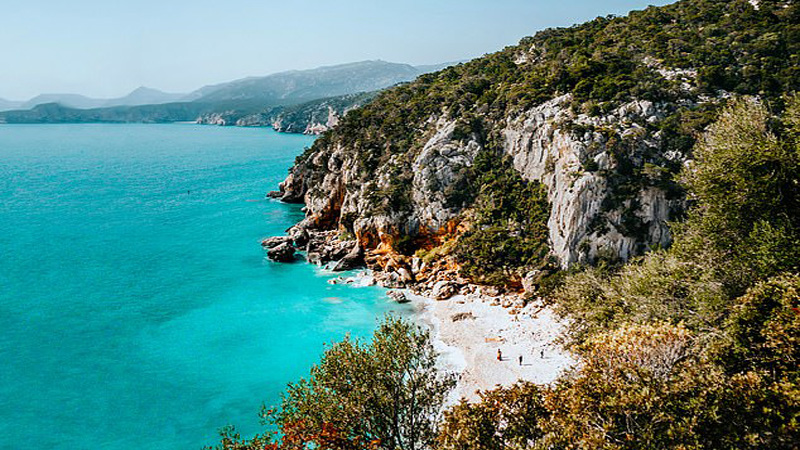 Are some destinations just too gorgeous? We have friends who will not visit romantic Venice, worried their relationship will seem drab by comparison. I never really understood this neurosis – until I arrived at Su Gologone Hotel, tucked in the folds of the Supramonte Mountains near Sardinia’s east coast.

‘Ah, the Madonna suite!’ beamed the receptionist, handing over our key. Yes, back when Mr and Mrs Ritchie were in love, they spent a whole month here. Initially, this puzzled me, since Su Gologone is not flash, but, stepping out on to our panoramic terrace, I saw what captivated the Queen of Pop.

Voluptuous tree-dappled hills and fields seemed to roll on to infinity.

Then I noticed my husband on a lounger, his eyes beginning their habitual glide towards his iPhone.

‘This is supposed to be a romantic break,’ I said.

‘Whose idea was that?’ he cried, as if I’d asked him to donate a kidney.

We gazed at the outdoor bathtub, vast enough for a starlit dip for two. What were the chances of our using it on this, our first trip without children after four long years in the parental coalmine?

Think of Sardinia and you picture the brash Costa Smeralda, baubled with yachts and pricey blondes.

However, its best-kept secret is here in Barbagia, so-named by the Romans, who dismissed anyone they failed to conquer as ‘barbarians’ (typical Italian spin).

Quizzed about romance, he confessed that Sardinians don’t have a phrase for ‘I love you’ and regard ‘ti amo’ as suspiciously phoney. But each village has its own expression for ‘I like you very much’

The region remains little known, as its coast is protected, allowing few hotels, but Su Gologone is a family business that grew up the slopes of Monte Corrasi after a plucky couple, Pasqua and Peppeddu Palimodde, opened a restaurant near the Gologone spring in the Sixties and hired the prettiest girls from Oliena village as waitresses.

As the sun set, we guzzled cocktails in the bar by a magnificent ravine, then headed to the restaurant, winding up and down the stairs past antiques, art and flowers in terracotta pots.

Hotel manager Giovanna Peppeddu, a glamorous artist, greeted diners like family, while matriarch Pasqua, now in her 80s, still rules the kitchen, turning out food and wine that has not travelled more than five miles to reach our table. 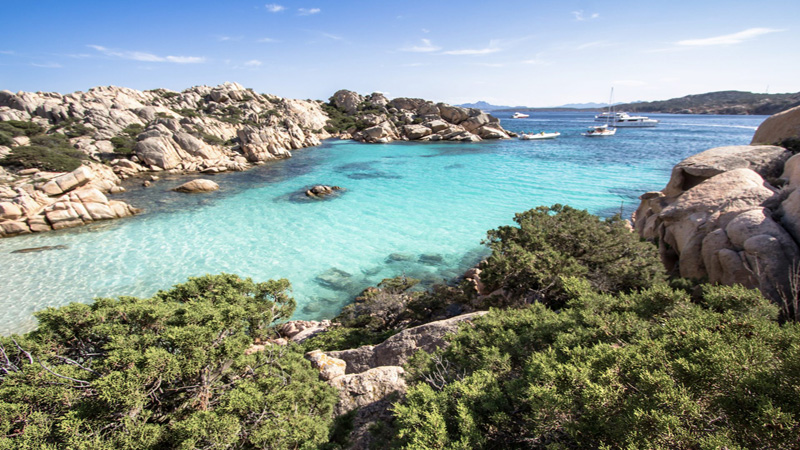 After waking up drunk on sleep (no small bodies in bed at 5am for a change) and a morning lolling by the pool, it was hard to leave.

Still, we had promised ourselves that we would go out in a kayak. Now, I’m a water-fearing weed, but, having written a book on marriage in the barely remembered years B.C. (Before Children), I also know that happy couples Do New Things so we toddled downhill to the spring and persuaded a puzzled man to hire us a paddleboat, assuring him that two hours would be quite enough, thank you.

I’m pleased to report that a kayak made for two is more romantic than a gondola. The upside of having minimal upper- body strength is the gratitude you feel for the person paddling while you rejoice in the scenery.

My husband agreed that, if Venus’s location scout were hunting for somewhere to refresh a relationship, the quest would end here.

After a minor altercation when a gatekeeper accused us of not paying, we made it back to the hotel, to find a 400-strong wedding reception at full throttle.

A merry reveller toppled over when we said ‘hello’, but we didn’t take it personally, and the hotel absorbed the party without breaking sweat.

The mountain acoustics even soaked up the disco before it reached our terrace, so we rested our muscles in the outdoor tub instead of dancing under the moon.

The next morning, we had lots to do, from pasta-making to watching women magic up bread that resembled giant golden Communion wafers and tasted duly divine.

En route to a beach picnic, our entrancing guide, Gianni, took us to a Bronze Age site built by the Nuragic people, whose black, igloo-shaped towers pepper the island.

Next stop was the beach for a picnic, Gianni reminiscing about a day trip with supermodel Claudia Schiffer while patiently carving slice upon slice of cheese and ham as the wind gusted sand at us. Quizzed about romance, he confessed that Sardinians don’t have a phrase for ‘I love you’ and regard ti amo as suspiciously phoney. But each village has its own expression for ‘I like you very much’.

Who’d have thought it? It’s us Brits who are the true romantics, not these so-called Latin lovers.