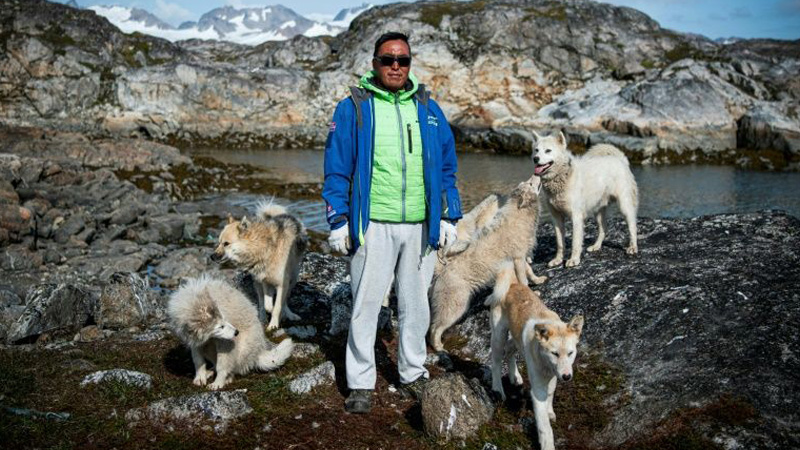 Tethered between pastel-coloured wooden houses in the Greenlandic village of Kulusuk and on hills nearby, the island’s famous sled dogs wait through the summer for the ice to form so their hunting season can begin.

Greenlanders prize the dogs for their endurance, using them to pull their sleds to hunt seals, whales and polar bears in the winter months when temperatures can drop to minus 35 degrees Celsius (minus 31 Fahrenheit).

But as the ice that covers 85 percent of Greenland melts and its winters grow unpredictable, climate change is casting a shadow over the much loved tradition in Denmark’s autonomous territory.

“The ice is changing,” says Moses Bajare, a 59-year-old musher from the village.

Snowmobiles are not used to hunt in east Greenland as hunting from boats has long been seen as an easier way to track seals and whales in these parts of the North Atlantic.

In winter, when the sea ice freezes, Bajare’s team of 12 dogs pulls his wooden sled out to the edge of the sea ice. From there, he kayaks out with a rifle to hunt seals.

But, he says, in the 35 years he has kept dogs, sea ice patterns have become less predictable.

The ice used to be thick enough to sled on from February until June or July. Now, it’s freezing later and thinning earlier, and the areas where it’s safe to sled vary frequently. Sledding is a way to get back to nature, says Bajare.

“When I have a problem, with the family, or life, I go with the dogs into nature.

“And in a day, two days, when I come back, it’s gone,” he says, his face covered by a mosquito net as he cleans his dogs’ enclosure on a rocky outcrop outside the village.

The dogs loll about Bajare, cleaning their distinctive woolly coats and wagging their curled tails under the mild summer sun.

Like most of the village’s 250 inhabitants, Bajare is Inuit, an indigenous people who make up some 90 percent of Greenland’s population.

Known for adapting to their surroundings, the Inuit have always made do with what nature provides in these harsh conditions, hunting animals for food, clothing, fuel and to build tools. A small museum in Kulusuk village displays tools made from bone, a kayak built from driftwood and clothing made from sealskin, showing how the hunters have continually refined these items to adapt to their changing needs.

For centuries, hunters like Bajare have sledded with Greenland dogs, a distinct breed similar to Alaskan huskies.

‘Losing part of our culture’

With the Arctic region warming twice as fast as the rest of the planet, Bajare’s worries are not unique to Kulusuk’s dozen or so mushers: 79 percent of the island’s population think local sea ice has become more dangerous to travel on in recent years.

And according to a Greenlandic Perspectives survey, carried out by the universities of Copenhagen and Greenland, some 67 percent say they think climate change will be detrimental to dog sledding.

Kunuk Abelsen is a young hunter from the village, with 22 dogs.

He keeps some on a rocky island across the fjord from the village during the summer, and as he steers his boat over to them on this August afternoon, they bay and howl to welcome him.

He points out the pack leader, Han Solo, a stocky dog with a light coat, sitting away from the other dogs, and his rival, a younger male named Cristiano.

For him, the dogs are an invaluable source of recreation.

“We don’t have football fields, we don’t have swimming pools. You can go to nature far away,” he says, pushing his tinted glasses up his face.

“If we stop using them, we’re losing a huge part of our culture.”

Like other mushers, Abelsen also earns money taking tourists out for sled rides on the snow on Kulusuk island.

But Abelsen says he’s beginning to wonder if it’s still worth having the animals.

He’s heard of mushers keeping fewer dogs, or getting rid of them entirely.

But Abelsen says he has also seen people adapting to the changes.

“Climate change is definitely not a good thing for dog sledding,” he says. “But it gives us possibilities to fish, mostly, to go hunting with the boat all year round. There are more people doing it.”

The mushers’ ability to adapt means the sled dogs will still have a place in the village, at least in the short term, says Italian researcher Andrea Fiocca.

“It’s actually not just a matter of hunting any more, it’s… life that is transforming and developing here in Greenland,” says Fiocca, an ethnographer and tour guide.

Fiocca spent four months in the village, researching, hunting with the mushers and studying how they perceive climate change.

“There is a lot of adaptation and resilience that is typical of Inuit people, that is really reflected in the way they perceive dogs (and) use dogs.”

Down by Kulusuk’s harbour, fishermen unload their catch at the small pier.

Abelsen’s father, Bendt, himself an avid hunter, fondly recalls long hunts with the dogs on the sea ice and hopes his son will be able to continue for years to come.