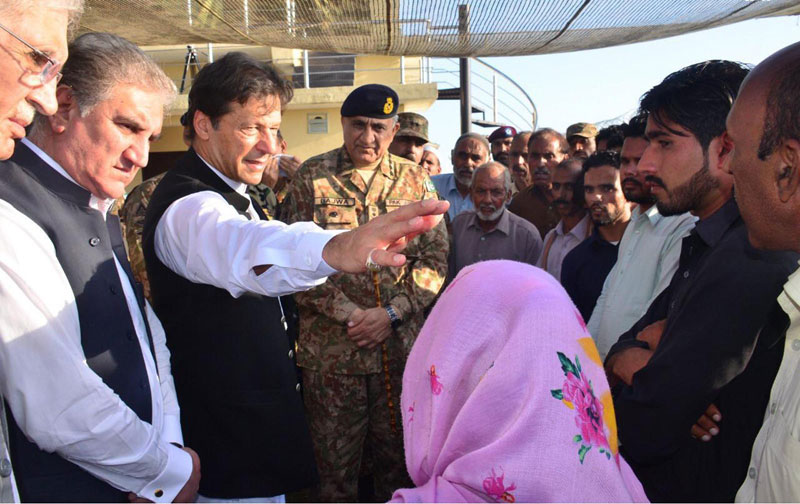 “While our current efforts are to expose fascist Indian regime to the world, our armed forces remain fully capable and prepared to thwart any Indian misadventure or aggression,” the prime minister said while talking to the families of the martyrs and the injured during his visit to the Line of Control on Defence and Martyrs Day, also declared as Kashmir Solidarity Day.

Talking to the families of martyrs and the injured, the prime minister lauded their decades of resilience. He said that Indian deliberate targeting of unarmed civilians in Azad Jammu and Kashmir and continued siege of innocent Kashmiris in Indian-held Jammu and Kashmir are the worst examples of the human rights violations. The prime minister reiterated that Pakistan firmly stands with Kashmiris for their right to self-determination.

The visit comes as Defence and Martyrs Day was observed on Friday to pay tribute to the martyrs and ghazis and reaffirm commitment to defend the motherland against all threats.

It was on this day in 1965 that the Indian forces crossed international border in the darkness of night to attack Pakistan but the nation foiled nefarious designs of the enemy.

The Defence and Martyrs Day was also observed as Kashmir Solidarity Day to reaffirm the support of Pakistani nation to the oppressed people of Held Kashmir who have been under lockdown for over a month now.

Special prayers were offered in mosques for the progress and prosperity of the country and liberation of the occupied valley from the cruel clutches of India. The day dawned with 31-gun salute in the federal capital and 21-gun salute in provincial capitals.

The main ceremony for Defence Day was held at the GHQ, where Gen Bajwa laid a wreath at the Martyrs Monument and observed a guard of honour.

A special ceremony was held at the mausoleum of Allama Iqbal in Lahore where Maj Gen Muhammad Aamir laid a wreath on Iqbal’s mausoleum. A contingent of the Pakistan Army presented a guard of honour.

A special ceremony including the change of guards was also held at the mausoleum of Quaid-i-Azam in Karachi. A smartly turned out contingent of Pakistan Air Force Asghar Khan Academy assumed the guard duties. Air-Vice Marshal Hamid Rashid laid floral wreath on the mausoleum and offered prayers.

Additionally, a ceremony was held at the Naval Headquarters in Islamabad.

Offices throughout the country were closed by 3pm to mark the day and show solidarity with Kashmiris and martyrs. People visited the families of the martyrs to assure them of their full support.