Kashmir an unfinished agenda of realisation of Pakistan: COAS 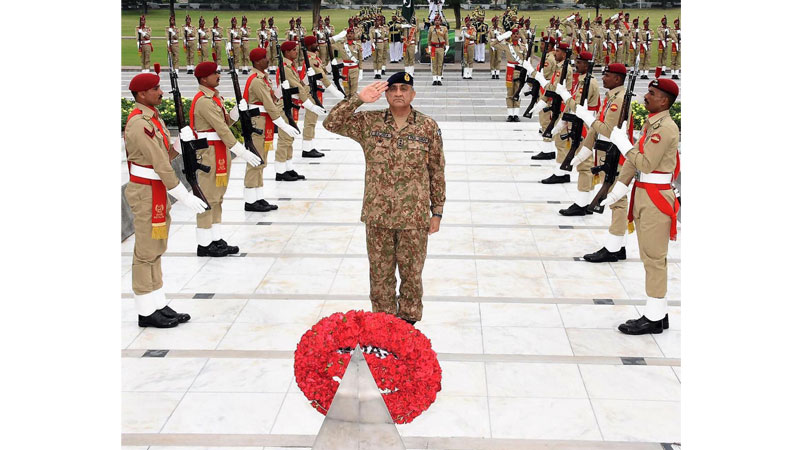 Chief of Army Staff (COAS) General Qamar Javed Bajwa on Friday said that Jammu and Kashmir is an unfinished agenda of realisation of Pakistan and it will remain so until the dispute is resolved in accordance with the United Nation’s Security Council resolutions and aspirations of the people of Kashmir.

“Kashmir is Pakistan’s jugular vein and we will never abandon our Kashmiri brethren,” the army chief said while addressing a function in connection with the Defence and Martyrs’ Day held at the General Headquarters. “Today’s Pakistan gives a message of peace and this message is for the entire world. Pakistan has fulfilled its responsibilities and it is now up to the global community to reject extremism,” he said. The sacrifices of our martyrs will not go in vain, the COAS said, and added that the environment in the country is peaceful.

“In Indian-held Kashmir, the state terrorism is at its climax and Pakistan will go to any length for the Kashmiris,” he said, adding that Kashmiris are the victim of the oppression and tyranny of the Indian government due to its Hindutva ideology. “I want to assure the people of Kashmir that Pakistan will never leave them alone. The hearts of Pakistanis and Kashmiris beat together,” he added.

“Pakistan’s armed forces are ready to give every sacrifice for the people of Kashmir,” the COAS said. “Today the peaceful and changing Pakistan is a message of peace, progress and tolerance for the world. When we look at the situation of the subcontinent, there are clouds of war and unease as we hope for peace and prosperity but Pakistan’s role has always remained positive,” he added.

“We have always emphasised the importance of peace, prosperity and dialogue, evidence of which is that Pakistan has always supported an Afghan-led and Afghan-owned peace process.”

Recollecting the sacrifices of the martyrs, the army chief said, “From 1947 till now, whether in traditional war or in operations against terrorists, our martyrs offered sacrifices and ensured the safety of the country.”

At the outset of the function, the COAS laid floral wreath at the Yadgar-e-Shuhada which followed the screening of a documentary in which the martyrs were remembered by their families and friends.

The function was attended by the families and kin of the martyrs besides senior military officials.