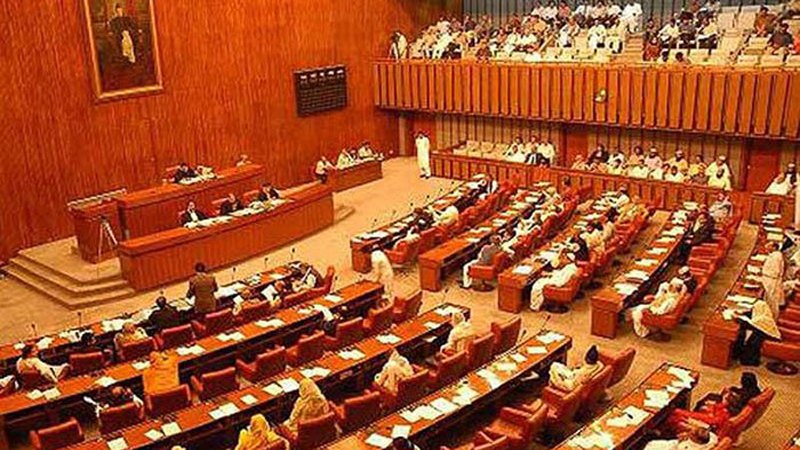 The Senate Standing Committee on Planning Development and Reforms was given a briefing regarding inclusion of additional 44 new schemes of PSDP (2019-20).

Secretary Planning Development and Reforms told the meeting that the PSDP for the current financial year amounted to Rs 701 billion and the amount had not been increased. He said that while staying in the same amount, some new schemes were added considering the need in less developed areas but none was added after parliament passed the finance bill. He said that consultations keep going at all stages and with all stakeholders including Parliamentary committees and so some changes were made after the consultations made with this committee. Members of the Committee, however, observed that no schemes were added on the recommendations of the members of Parliament for the same less developed areas but later the schemes have easily been added and expressed shock at this apathy towards Parliament and its members. Secretary Planning remarked that prioritization of schemes is done by the line ministry and schemes have to be routed through them and not directly to planning. The Chairman Committee Agha Shahzaib Durrani and the Leader of the House in Senate Senator Shibli Faraz expressed concern over the procedure adopted for finalization of the schemes. A sub-Committee was constituted to look into the matter in detail.

While discussing the draft Energy Policy 2019, the Committee was told by AEDP that the draft prepared after taking all stakeholders on board will be put before the AEDP Board for approval next week and subsequently will go to Cabinet and CCI. The Committee asked AEDP to share the draft with the committee for its input and also asked for an extensive briefing on what incentives are being provided to investors for renewable energy sector and how the current policy will be different from the Energy Policy of 2019. Chairman Committee Senator Shahzaib Durrani was of the view that the directions were also given in the last meeting to make the new draft an investor friendly incentive for businesses as well as overseas Pakistanis so that they can help make Pakistan’s energy grid a good mix of renewable and non-renewable energy. Leader of the House was of the view that renewable Energy is being discouraged by design and many people who came to invest in this sector are going away again. He said that investors have to be incentivised as there is a strong lobby that is active in this and doesn’t want their businesses affected.

On the matter of extensive amounts being paid as subsidy to tube wells in Balochistan, the Committee observed that there should be a permanent solution to this by either solarizing the tube wells or some other solution. The minister told the meeting that in this matter lead will have to be taken by Power ministry and finance and planning will be assisting them. The Committee decided to call a joint meeting of Power, planning and government of Balochistan to discuss the matter and recommended coming up with as many business proposals for the matter as the ministry of power can. The Committee was told that feasibility study on water table situation will complete by March 2019 and then a work plan will be formulated.

The Minister told the Committee that meetings were held a few days ago with the government of Sindh and the matter was discussed at length. He told that in addition to realignment of K-IV project phase, K-I, K-II, K-III also need some optimization. He said that NESPAK presented the initial K-IV Design review findings and has proposed design improvements after completion of technical study by NESPAK by end of September 2019. NESPAK will submit complete feasibility study of technically viable and economically feasible solution of K-IV project to Government of Sindh within two months. Joint Technical Review Committee will review and assess the NESPAK report. The Committee directed that TORs of this joint committee should be shared with this committee of the Senate. Chairman Committee emphasized on the need of paying due consideration to the kind of consultants hired for such projects as they later contribute in cost escalation and extended timelines. The Committee also observed that huge responsibility lies on the ministry of planning that vets all the projects and has to have responsible people for this job.

The Committee was given a briefing by DG Gwadar Development Authority on Necessary facilities of fresh water treatment, water supply and distribution system in Gwadar. It was told that the current daily demand of the city stands at 7.48 MGD and supply is 2.5 MGD. Work completion of Shadi Kour Dam transmission line the city will manage to get additional 5 MGD. However, the distribution network to supply the water at home is still not in place and the infrastructure which was to be established in phase 3 of the project will have to start simultaneously. The Committee asked GDA to submit a revised PC-I of the project to planning within ten days and asked the ministry of planning to prioritize its funding so that work on Gwadar city can be expedited.

Regarding the project of UET Khuzdar project, the committee was told that the project comes under the ambit of ministry of science and technology who will share the modified PC1 with ministry of planning in ten days’ time.