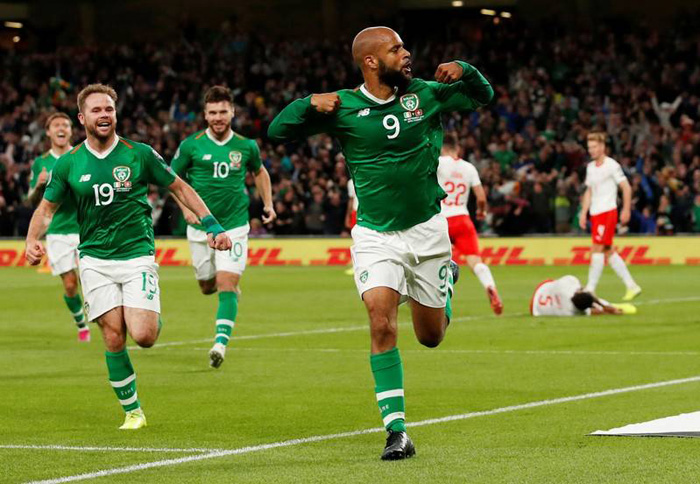 David McGoldrick’s first international goal grabbed Ireland a potentially crucial 1-1 draw in their Euro 2020 qualifier with Switzerland on Thursday as an easy victory for rivals Denmark in Gibraltar kept things incredibly tight at the top of Group D. Fabian Schar looked like he had won it for the visitors on 74 minutes when he finished off a brilliantly worked team goal but just as they did in Copenhagen in June, Ireland secured a point near the death thanks to McGoldrick’s 85th-minute header. “We’re not the best team in the group but I’ll tell you what, you’re going to have to put us down before we give up,” Ireland manager Mick McCarthy told a news conference, likening the atmosphere at the Aviva Stadium to his days as captain under Jack Charlton’s Irish team of 30 years ago.

“We’ve got a point against a very good side, who for periods of that game were better than us, a team full of very good players playing from good clubs… (My) players just keep going, they give me everything. They’re absolutely brilliant.” The draw kept McCarthy’s men on top of the group with 11 points from five games, three ahead of Denmark, who have one game in hand and a much better goal difference. Ireland are six points clear of the Swiss, who have played two fewer games. In Gibraltar, Denmark were easy 6-0 winners thanks to two Christian Eriksen penalties, a Christian Gytkjaer brace from open play and one each for Robert Skov and Thomas Delaney. Ireland, who had the easier start of the three contending sides grabbing six points against Gibraltar and a home win over Georgia, created the two best chances in the first half against their more dangerous-looking opponents. Winger James McClean should have done better early on after being put through following nice link-up play by Callum Robinson and Jeff Hendrick while McGoldrick should have found his Sheffield United team mate Robinson with a ball across the face of the goal just before the break.

Slick play: Switzerland, without Xherdan Shaqiri who asked not to be selected to concentrate on his club football at Liverpool, continued to press intermittently early in the second half but were getting little change from Ireland’s centre-half pairing of Richard Keogh and Shane Duffy. When they finally got a clear chance after some slick play in the box, Breel Embolo slipped and fell on his backside with the goal seemingly at his mercy and the ball dribbled harmlessly wide. There only looked like one winner at that point though as the Borussia Moenchengladbach man nearly made up for his slip before Newcastle defender Schar struck, the culmination of some brilliant one touch football. But Ireland would not give up and after Glenn Whelan smashed the crossbar with a rocket from outside the box, McGoldrick rose highest from the resulting cross to the delight of the Aviva Stadium crowd, where Ireland will play two Euro 2020 group games if they qualify. “It’s been a long time coming,” the 31-year-old late bloomer said in a pitchside interview after notching his first Irish goal in 11 caps. “We’ve got some tough games to come, but if we play like that it will stand us in good stead.”

The chasing teams can close the gap on Sunday with the Danes travelling to Georgia and Switzerland coach Vladimir Petkovic saying his side will be chasing goals against bottom-placed Gibraltar to close an eight-goal gap on goal difference between them and Denmark.