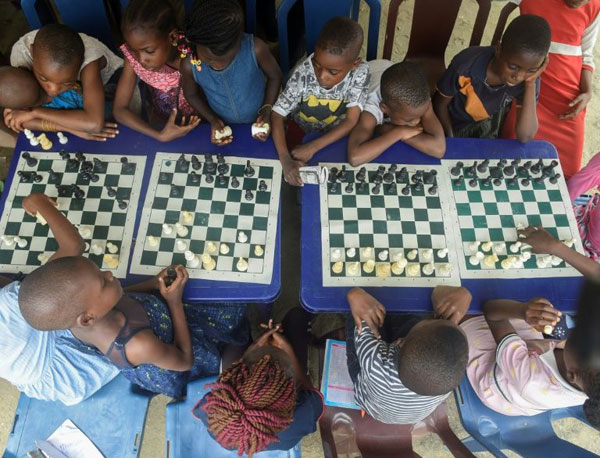 Crowds of children bustle around chessboards in Nigeria’s Lagos, figuring out their next moves as part of a project aimed at bringing hope in one of the city’s impoverished slums.

Dozens of matches are played simultaneously as participants as young as three master a game often considered out of reach for the masses in Africa’s most populous country.

“Sometimes you win, sometimes you lose,” 24-year-old teacher Tunde Onakoya tells his young charges after getting their attention.

“But it’s how you respond that makes you a champion. Don’t get down when you lose, don’t feel like you can’t do it, just concentrate and do your best.”

Seasoned player Onakoya started the Chess in Slums project last September in the sprawling neighbourhood of Ikorodu, a place where residents often feel cut off from the bustle and business of the vibrant megacity around it.

The goal of the club is to provide a space to play and learn the game for the young inhabitants of the slum, many of whom are not in school and work to support their families.

Held beneath a makeshift tent in the courtyard of a local bar, in less than a year the programme has already drawn an enthusiastic following.

As elderly men sip beer and watch football nearby, a dozen volunteers divide the pupils into groups. While some turn their figures into battling action heroes, most are focused and intent on winning. The youngest children sing rhymes about chess to help them master the rules, as the older ones settle down into intense games.

They use mobile phone apps to time their moves and record the matches in notepads to review their mistakes and successes later.

“I want to be a Grandmaster,” one of the children tells AFP, laughing.