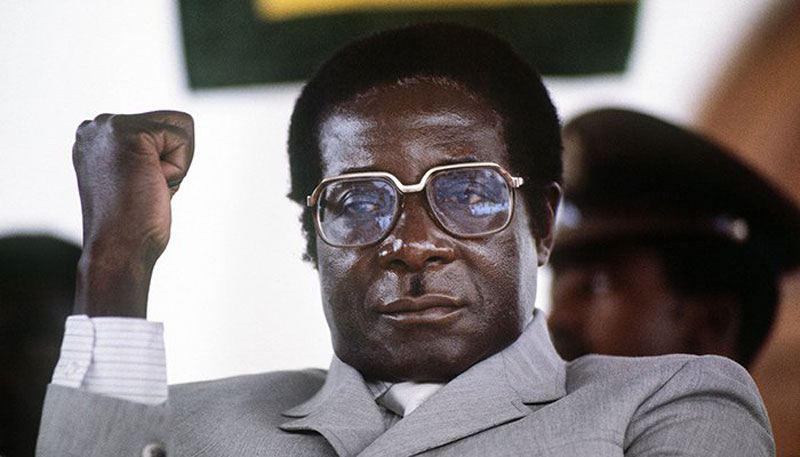 HARARE: Robert Mugabe ruled Zimbabwe from its independence in 1980 after British colonial rule until 2017.

Here are four of the most notorious chapters of his long and autocratic rule:

Optimism that Mugabe would lead a new, united Zimbabwe ended in the early 1980s with the mass killing of the minority Ndebele people in a campaign known as Gukurahundi.

Some rights groups believe around 20,000 so-called dissidents were slaughtered by Mugabe’s ruthless Fifth Brigade, which was trained by North Korean forces.

Presidential successor Emmerson Mnangagwa is accused of being an architect of the atrocities carried out mainly by soldiers from the Shona ethnic group, to which Mugabe belonged, against civilians of rival Joshua Nkomo’s Ndebele group in the western region of Matabeleland.

The operation was known as “Gukurahundi” – Shona for “the rain that blows away the chaff before the spring rain”.

Public beatings were followed by mass executions, huts full of terrified villagers were burnt down, crops were destroyed and communities deliberately starved to death.

Torture and interrogation at brutal camps was commonplace, with inmates kept in cages filled with blood and faeces of previous victims.

Trucks emptied thousands of bodies into mine shafts.

Villagers were forced to sing ZANU-PF party songs in Shona and dance on the fresh graves of their murdered families, according to Martin Meredith’s biography of Mugabe.

“Don’t cry if your relatives get killed,” Mugabe said at the time. “Where men and women provide food for the dissidents, when we get there, we eradicate them.”

The massacres were a push by Mugabe – then prime minister – to impose one-party rule and crush his rival, Joshua Nkomo.

Mugabe later dismissed Amnesty International evidence of the massacres as a “heap of lies”.

In 2000, gangs of men armed with axes and machetes started invading white-owned farms across Zimbabwe.

Transport, supplies and daily allowances were provided by the government, which said that the men were veterans of the independence war – though many were too young to have fought.

The seizures were intended to quell growing support for the Movement for Democratic Change (MDC) opposition, which was backed by many white farmers and some agricultural workers.

With farmhouses attacked, cattle killed and equipment stolen, white farmers – who had often bought their land after independence – fought back through the courts but many were forced to flee.

ZANU-PF mobs camped on more than 1,000 farms, often beating up farmworkers as well as landowners. Several farmers were murdered.

Under colonial rule, the best land had been reserved for whites, and Mugabe depicted the invasions as a battle to secure the rights of poor, black Zimbabweans.

As harvests and production fell, the farm sector collapsed and hundreds of thousands of farm workers lost employment.

Many farms were allocated to Mugabe loyalists and left untended, while others were given to landless black Zimbabweans who lacked the means to farm successfully.

The country, once a major exporter known as the breadbasket of Africa, has since endured severe food shortages as some of the continent’s best agricultural land lies in ruins.

The collapse of agriculture tipped the country into a crisis that Mugabe tackled by printing vast amounts of Zimbabweans dollars.

The flood of cash rendered the currency worthless and drove the economy to collapse.

Hyperinflation hit 500 billion percent – and produced the 100-trillion-dollar banknote that barely bought a loaf of bread.

In 2009, the Zimbabwean currency was abandoned, mainly in favour of the US dollar.

With US dollar banknotes increasingly scarce, the government in 2016 started printing its own “bond notes” which were theoretically worth the same as a dollar.

In June 2019, Zimbabwe ended the use of US dollars and other foreign currencies and replaced them by two local parallel currencies – bond notes and electronic RTGS dollars, which would combine to become the new “Zimbabwe dollar”.

A government document early this year said that around 7.5 million people – around half of the population – in both rural and urban areas would require food aid between February 2019 and March next year.

Throughout Mugabe’s rule, elections were marred by violent repression of opposition parties, intimidation of voters and fraud.

In 2008, the opposition MDC claimed victory, but electoral officials said Morgan Tsvangirai’s lead over Mugabe was narrow and a run-off was needed.

Amid a wave of attacks by ZANU-PF operatives in which around 200 people were killed and thousands were tortured, Tsvangirai pulled out of the run-off to avoid further bloodshed.

The two men joined in an uneasy coalition.

In 2013 elections, Mugabe gained a seventh term in office and the ZANU-PF party won three-quarters of parliamentary seats in polls widely dismissed as a fraudulent.

No Western observers were allowed to monitor the vote.

The voter roll was criticised by Human Rights Watch as systematically biased in favour ZANU-PF’s rural support base.

Food aid was also regularly used as a political tool, with access channelled towards Mugabe supporters.

Many voters were often turned away from polling stations and the state media and security forces openly favoured Mugabe and his party.